On Thursday 4 April the village of ‘Anabta, near Tulkarem buried two of their young men. Amer Nassar, 17 and Naji al-Balbisi, 18 were shot dead by the Israeli Army at the Enav checkpoint late on Wednesday evening. 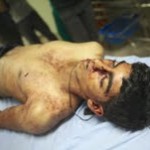 Amer Nassars body in the morgue. Photo by WAFA News

Despite reports last night that Naji had escaped the Army gunfire, he was found by the Red Crescent medics on Thursday morning after a phone call from the Israeli Army.

Last night Amer was shot in the chest and the Israeli Army prevented his fellow villagers attempts to reach him
resulting in Fadi Abu-A’sr being shot in the arm. Naji was shot in the back, indicating he was running away from the soldiers, which accords with reports taken from witnesses.

The funeral procession was joined by the entire village including Khader Adnan and fellow former hunger striking prisoners. To date there has been no information from the Israeli Army about the fate of Deiyaa’ Nassar, despite reports he was injured at the time of his arrest. His family have been unable to obtain any information from the Army on his condition or whereabouts.

The Army regularly arrest Palestinians, holding them for up to 8 days without access to a lawyer, adequate medical attention or contact with their families. This detention can continue indefinitely and has sparked the mass hunger strikes from prisoners such as Khader and the current hunger striker Samer Al-Issawi, who is in a critical condition after refusing food for over 250 days.

This escalation in violence is a familiar pattern for Palestinians. In recent months the Israeli security forces killed Arafat Jaradat as a result of interrogation tactics. The murder of Amer and Naji and arrest of Deiyaa’, also comes a day after the prisoner Maisara Abu Hamdiyeh died as a result of medical neglect. 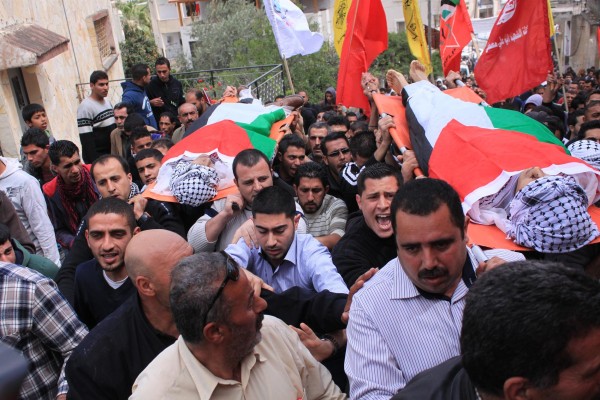