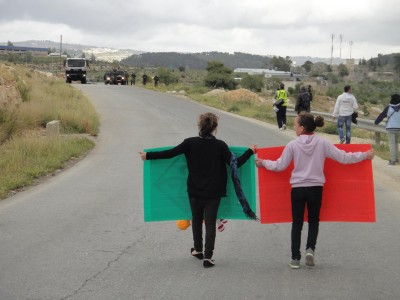 On Palestinian Children’s Day, the kids of Nabi Saleh played a leading role in their village demonstration, holding banners and balloons, claiming their rights to a childhood free of oppresion and occupation. However, Israeli forces, as they regularly do, quickly suppressed the demonstration.

As the crowd of protesters were marching along the road with the intention of going to their stolen water spring down the hill, Israeli border police accompanied by a skunk water truck started to shoot the malodorous water and tear gas canisters at the protesters.

Border police officers, located on the main road and on the two hilltops beside it, continued shooting tear gas canisters for approximately an hour, after which they further invaded the village, chasing Palestinian youths down the hills on the other side of Nabi Saleh. A local journalist was severely pushed, pepper sprayed and had stun grenades thrown at him by Israeli border police officers whilst covering the protest. 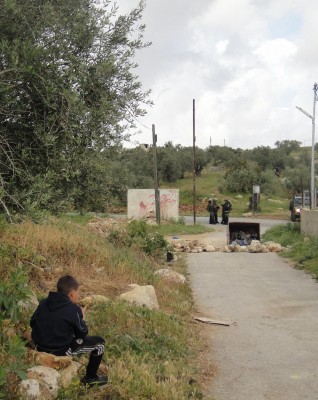 The demonstration finished at around 3pm when Israeli forces retreated from the village. Then, the children of Nabi Saleh, took over their streets to celebrate their day, claiming their right to a childhood without Israeli occupation.

The village of Nabi Saleh has been demonstrating against the theft of the natural spring and the occupation since December 2009. Israeli forces violently suppress the weekly Friday protests by shooting tear gas canisters, skunk water, sound bombs, rubber coated steel bullets and even live ammunition at protesters. Two people have been killed, Mustafa and Rushdi Tamimi, and many others severly injured. Bassem Tamimi, from Nabi Saleh, has spent 16 months in Israeli jails for the only reason of being a prominent activist at the protests. After more than three year and despite the repression, Nabi Saleh continues to fight against the injustices of a brutal military Israeli occupation.