The snow that fell on the West Bank village of Urif on January 10 was the heaviest in years, enticing delighted children out of their homes. But snow was not the only thing to descend on the village that morning.

As the children threw snowballs, dozens of Israeli settlers came down from the hilltop settlement of Yizhar, brandishing guns, stones and even a sword.

What happened next was witnessed by Maltese activist Andre Callus, 26, who was in the Nablus region with the International Solidarity Movement, a non-violent group “committed to resisting the Israeli apartheid in Palestine”.

He showed The Times a video of the clashes in the village that day, filmed by the ISM.

A Palestinian can be seen lying on the ground, shot and injured by a live bullet fired by settlers or the Israel Defence Forces that protect them.

Members of the army can later be seen throwing a sound bomb to disperse international activists who appeared to be asking them to keep the settlers away from the village.

“This was an almost daily occurrence in Urif; sometimes settlers’ attacks would happen three times a day,” Mr Callus said.

The situation in this area hit the headlines in the past days when US President Barack Obama made his first visit to Israel and the West Bank since assuming office in 2009.

Israeli settlements in the Palestinian territories, occupied by Israel since they were captured in the 1967 Six Day War, are widely considered to contravene the Fourth Geneva Convention, although Israel rejects this. Their existence on land recognised as Palestinian territory by the UN is seen as one of the obstacles to a viable two-state solution to the conflict.

In the West Bank from October to January, Mr Callus soon got used to the weary rhythm of violence around settlements which is provoked, he says, by armed settlers entering villages and wilfully damaging property.

“There used to always be a settlers’ guard with them who was famous for having killed people.”

Why? “Because they think the land is theirs, given to them by God.”

Palestinian youths would throw insults and stones in response and the army would come down from the settlements shooting tear gas.

If they did not disperse, the army would fire rubber bullets and, sometimes, live bullets, Mr Callus said.

“I saw 15 Palestinians injured by live bullets in the time I was there.”

As an ISM volunteer, Mr Callus said his main duties were to witness and report events on the ground and to deter or, at least, lessen the extent of violence.

ISM volunteers would only go somewhere if their presence was requested by Palestinians.

The dreadlocked Mr Callus has a well-publicised history of direct action in Malta, particularly against racism.

Although his actions have not always endeared him to conservatives, he is a well-read, highly motivated and articulate individual who dedicates much of his time to fighting perceived injustices.

Mr Callus was unequivocal in describing the situation in the West Bank as “apartheid”. He cited settler-only roads, humiliating checkpoints for Palestinians, harassment from settlers and the army, widespread arrests and the use of military courts as ample evidence of this.

“Settlers are not renegades that Israel has no control over. They are protected by the Israeli Defence Forces. They are actively encouraged to live there by the Israeli Government,” Mr Callus said.

On the other hand, Israel places strict conditions on buildings by Palestinians in the West Bank and East Jerusalem and demolishes structures that violate these conditions.

According to the UN, 599 such structures were demolished last year, displacing 886 Palestinians, more than half of them children.

“It is a deliberate policy of ethnic cleansing,” according to Mr Callus.

For Mr Callus, it is not a conflict between equal sides with equal grievances.

“It’s about occupation, apartheid and the stealing of land. The cause of the conflict is not the conflict itself. The reasons almost exclusively lie in Israeli oppression of Palestinians,” he said.

The most reasonable solution to the current situation would be one secular, democratic state for both Israelis and Palestinians, in Mr Callus’s opinion.

With more than 600,000 settlers now living in the occupied West Bank and East Jerusalem, Mr Callus does not think a two-state solution based on the pre-1967 borders is viable, although he accepts this could change.

“Right now, the idea of one secular, democratic state is really difficult to imagine, but it is even harder for me to imagine a two-state solution. Look what happened with South Africa and apartheid – whites once oppressed blacks but now they live side by side.”

Mr Callus wanted to make it clear that he has nothing against the Israeli people.

“What happened has happened and the Israeli Jews have a right to stay there and live in peace. But it is racist to say this land is only for Jews.” 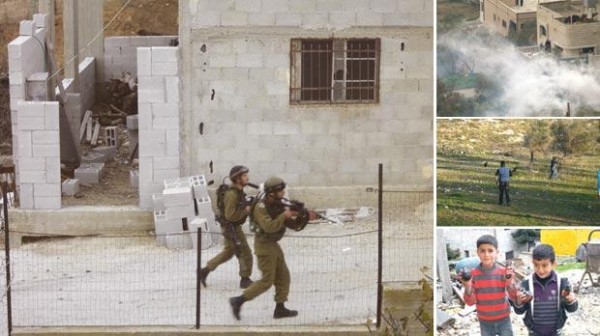 Scenes from the West Bank provided by the Palestine Solidarity Movement