Twelve-year-old arrested and blindfolded in Hebron

Ahmed Ibn Bilal Abu Rumeileh, a 12-year-old boy from Hebron, was today arrested in the Old City and detained for over an hour before being released. Ahmed was riding his bike through Bab Al-Baladia when six Israeli soldiers stopped him and arrested him, seemingly completely at random. Ahmed was blindfolded and taken to Beit Romano army base on Shuhada Street, where he was detained for around 45 minutes. 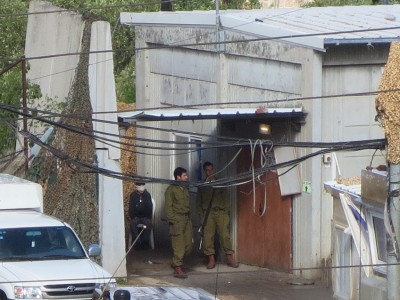 He was then driven in a military jeep to checkpoint 56 where he was eventually released into the custody of the Palestinian police, who registered Ahmed’s details and completed some paperwork before taking him home to his family. Upon questioning by international activists, Israeli soldiers claimed that Ahmed had been arrested due to throwing stones at the Israeli military in the morning, however Ahmed denies this. The Israeli occupation forces regularly accuse children and young men of stone-throwing and use this as an excuse for arrests, which often happen at random.

Ahmed’s arrest comes as part of a series of increasing arrests and detentions of minors in the Old City of Hebron in recent months. “Occupied Childhoods”, a report on child-arrests compiled by the Hebron Christian Peacemaker Team is available here.

In March 2013, UNICEF released a damning report in which it harshly critized the “ill-treatment of Palestinian children in the Israeli military detention system [which] appears to be widespread, systematic and institutionalized”. You can read this here.

You can also see recent testimonies from Palestinian children imprisoned by the Israeli military.