“Our prisoners are dying.” Students mobilise in Gaza

“Our prisoners are dying.” said Gaza student Khaled Shehab from the Islamic University. “We won’t wait till the death of another prisoner to move in solidarity with all the detainees.” Khaled was joining the thousands attending the growing number of demonstrations in the Gaza Strip right now. 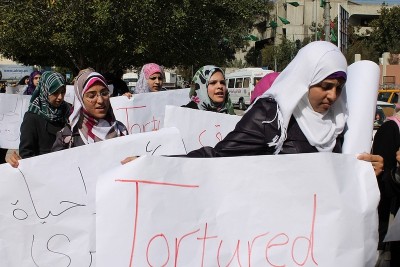 Majeda Sabbah, with other students protesting the death of Arafat Jaradat in Israeli custody . Photo by Joe Catron

It is not lost on young people in Palestine acting in support of Palestinian prisoners that many who have spent years in Israeli jails were at the same age when they were originally imprisoned. While there has recently been a spotlight on the 219 Palestinian children currently detained by Israel, it is often forgotten that the majority of detainees arrested are youths or in their early twenties. Some have spent the entire decade of their twenties removed from their parents, their families and communities, a young person’s life defined by Israeli prison walls.

Mohammed Al Adini explained his story late at night in the tent erected outside the Red Cross offices in the Gaza Strip, where some Palestinians were on hunger strike in support of those striking in Israeli prisons. He was arrested aged 20 in June 2003, just short of concluding a two year office management course at a college in Deir El Balah, central Gaza. He was imprisoned for nine years and released in the prisoner swap deal after which he was able to complete his course at the University of Gaza aged 31. 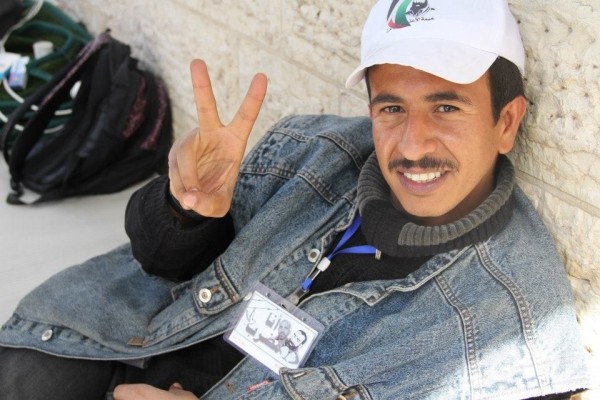 “There were some classes in prison but we were often prevented from going. So we organized our own “internal education” where any prisoners with an academic background such as languages, history and law would teach the other prisoners. It depended on the cell we were in but classes were generally around ten to twelve students. I taught history and Palestinian issues.”

Mohammed knew many students and academics on long term prison sentences. Yassir Namrouiti visits the solidarity tent in Gaza regularly. He was studying at the University of Al Quds when he was arrested in 1987. He didn’t see freedom again until 24 years later when he was released with Mohammed in the Gilad Shalit swap deal 24 years later. Karim Younis who remains incarcerated after 31 years, was a student when arrested in 1983 and was attending classes at Ben Gurion University on the day the Israeli army raided his house. He is now a prison representative and the author of two books. His personal and historical writings from prison have reached and inspired many who support him and the other 4800 Palestinian detainees.

Mohammed does not appear bitter that his education was taken away and is enthusiastic about the rise in student solidarity. “I am so pleased that students in Gaza have rallied around the cause of the prisoners.” said Mohammed. “They are using different languages to express our cause through facebook and other media, which is something we have never been able to do before.”

Khaled shares Mohammed’s certainty that the youth of Palestine have a crucial role to play in the resistance against occupation, which is why many student leaders have been a target for Israeli arrests and incarceration. “Youth and young people are strongly involved in resistance against occupation. Israel arrests them to stop resistance. They want to destroy the educational life for the students. They are aware that students can expose them and their crimes to the world, especially now that so many are communicating directly to Western audiences.” 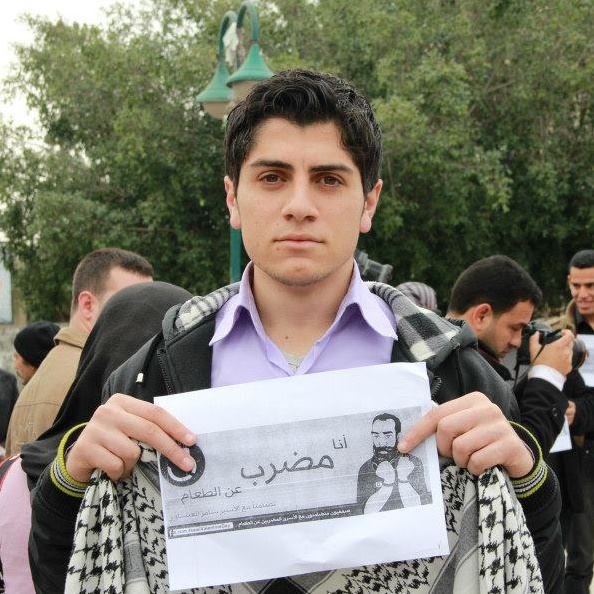 He cites other Palestinian students from Gaza such as Malaka Mohammed and Shahd Abusalama whose blogs and reporting on the prisoners in the English language have amassed many followers globally, with frequent updates on the individual stories of prisoners and the ordeals and injustices facing them.
The day after 30 year old Arafat Jaradat was killed after six days of Israeli detention last Monday, Majeda Sabbah, Khaled and other students immediately organized a demonstration, calling for united support for all Palestinian prisoners.

“Arafat didn’t just die” said Majeda. “He was killed under the systematic torture that takes place in Israeli Jails.”

We are here to show our support for all the hunger strikers and all the political prisoners. The sons of Palestine sacrificed their freedom and belief for others, like Samer Issawi who is now in a critical condition after a hunger strike of over six months. We young people in Gaza support them, which is why we mobilized quickly as soon as we heard about Arafat. We can’t wait for the parties to move. If we didn’t act for a united struggle then no one would.”

Most Palestinian families contain someone who has been detained in Israeli Jails or is currently incarcerated. “My uncle was a prisoner.” said Khaled. “He spent 25 years in Israeli prisons and was recently freed in the swap deal. He joked that over time they changed the prison door three times while he remained in the same room.”

For relatives of current detainees in Israel the struggle can never go away. It is a double agony – for those on the inside and those on the outside. The last hunger striker who won his freedom was Akram Rikhawi, who in his ninth year of incarceration refused food for 104 days. “When I was released I could not recognize Samah, my eleven year old daughter” Akram told us. Samah was just two years old when he had last laid eyes on her. “My wife was allowed to visit me once in that time and my mother also once. I learned of my mother’s passing on prison radio a month after she had died.”

Mohammed Al Adiny said that it was being away from his family and friends that hurt most in prison. “I would send letters to my mother. I would tell her that if she wants me to be okay, just smile. Your smile is what gives me strength is what I would tell her.”

The fight of the hunger strikers goes on. Samer Issawi, now weighing just 44 kg was recently moved to Haifa hospital after a serious deterioration in his health. Ayman Sharawna was moved to the Soroka Israel hospital in Beersheba last month, briefly falling into a coma after which for a period he was unable to move, suffering severe pain to several parts of his body.

Hana Shalabi, a female detainee released after a 43-day hunger strike in March 2012 was in attendance at Sunday’s demonstration and she described to some of the students what Samer and Ayman were going through. “I’m sorry for the death of Jaradet, sorry for his family in the West Bank. Sadly I’m not surprised, this is not a new thing with over 210 prisoners who have been killed in Israeli prisons since 1967. By my experience on hunger strike I feel what they feel. You can’t sleep because of the pain, you can’t speak, you can’t move, there’s hair loss, pains in the stomach and joints, you can’t see well, there are heart irregularities, palpitations and migraines. Soon your body, like mine, can’t accept water.” 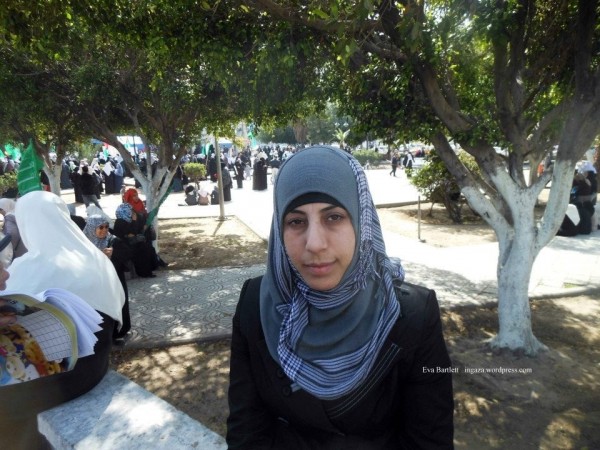 At the time of writing Samer Issawi and Ayman Sharawna are among 178 prisoners who are being held under what Israel defines as “Administrative Detention” . This open ended imprisonment without a formal charge has been condemned by major international human rights groups. This self-sacrifice of Samer, Ayman and the other detainees has struck a chord with young people across Palestine who are absorbed in the struggle for life and dignity of the hunger strikers. They want immediate action.

“When students and young people become more aware and start writing about israel’s crimes it’s like a disaster for Israel. We want to deliver our message all over the world. Palestinian prisoners don’t have basic human rights or dignity. They’re not treated as human beings. We demand the Israeli government release the hunger strikers.”

Adie Mormech is a Gaza-based activist with International Action for Palestine and a teacher at Al Aqsa University in Gaza City.