“ISM Co-Founder and soon to be father, Adam Shapiro prohibited from witnessing the birth of his first child due to an undisclosed travel ban from 2009 and forthcoming deportation”

“Adam and I are expecting our first child, a boy in about 5 weeks. As joyful as this blessing is, we’ve had to make some difficult decisions.”
The words of ISM (International Solidarity Movement) co-founder Huwaida Arraf as she speaks on her husband of 11 years imminent deportation by the state of Israel. Shapiro, a US citizen and Arraf, a Palestinian citizen with an Israeli ID have played a fundamental role in guaranteeing on the ground, international activism since the beginning of the second Intifada. Since 2002, Shapiro’s indefatigable human rights work for Palestinian justice has led him to be a persona non grata. Just like thousands of solidarity activists, Shapiro has found himself on the receiving end of an illegal 10 year ban from Israel and the occupied Palestinian territories, alongside millions of Palestinians who have been denied the right of return to their homeland.
On Sunday March 3rd 2013, Shapiro and a 35 week pregnant Arraf defied injustice by attempting to travel through Tel Aviv; however after being held for hours at immigration, it didn’t lead to a happy family rejoicing but a bleak separation of loved ones. As Arraf wrote her story from her village of Mi’ilya and Shapiro was kept in a detention cell. The main dilemma faced by this couple, was that due to Israel’s apartheid policies, denial of Palestinian rights, including the UN resolution 194 right of return, their unborn child’s only chance to breathe the air of his native country and to step foot on the land of his people, as to be with his family, was that the child must be born in Israel. Israeli citizenship cannot be claimed outside of Israeli borders without laborious process, since Arraf is not a Jewish citizen of Israel or of Jewish descent but Palestinian. Arraf justly writes “”I wrote…that I’m always unnecessarily optimistic. However, I’ve never been optimistic about the Israeli Injustice system.” Unfortunately, despite Arraf’s optimistic nature, she had to forcibly accept this inequality, knowing that her husband would most likely be prevented from being present at the birth; either choice is devastating for the family. 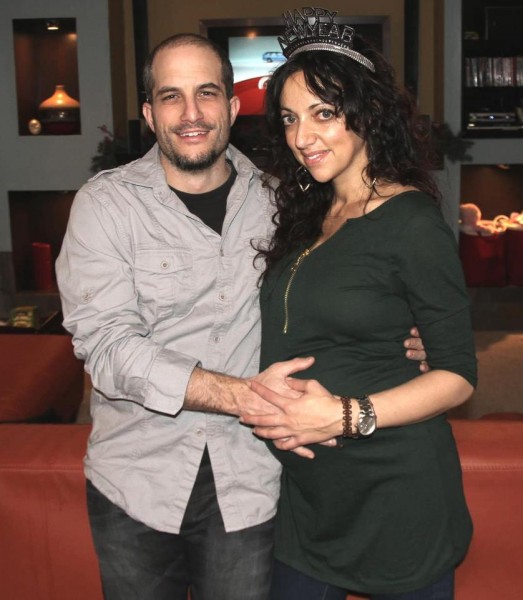 Shapiro’s previous 2002 ban came during the time of the second intifada, when enormous Israeli military incursions were taking place in the West Bank. His apparent wrongdoings were that he cross the threshold into President Arafat’s besieged compound as not only an ISM activist but a medical volunteer, assisting two men who had been shot, to safety and a few months after this, he stood in solidarity with the village of Huwwara, near Nablus, as they protested the invasion of the West Bank and attempted to break the military curfew. This latter activity saw him jailed for 5 days and deported swiftly. Later in 2009, both were aboard the Flotilla “Spirit of Humanity” which attempted to breach the illegal and brutal blockade on the Gaza Strip, it was in this time that Adam was surreptitiously handed down another 10 year ban, due to being charged with “illegally entering Israel”, even after the judge in that case agreed with Adam that he wasn’t endeavouring to enter Israel at all.
Better news was not to come on March 5th 2013, as Shapiro’s court hearing only lasted a short, disheartening 30 minutes. In this time Arraf explained that it was clearly explained that neither of them had any previous knowledge about the 2009 ban, as Arraf states “The judge didn’t care that we were never informed about the ban in order to challenge it beforehand”. This perversion of the law would have happened regardless of the unsubstantiated 10 year ban which is just used as a thin “official” veneer, since it was never clearly addressed, for as Arraf bluntly notes ““So, even if Adam didn’t have this ban issued in 2009, the Israeli authorities would have found other reasons to keep him out.” It must be noted that had the US embassy been an advocate of Shapiro’s case, the courtroom judgement may have ended with a compromise. To flip the coin and rub salt into these open wounds, the US congress has undergone introduction of a resolution known as the US-Israel strategic Partnership Act of 2013. This act, if passed, will oversee a new right for Israelis travelling to the US, as they become exempt from having to obtain visas when entering the USA, whilst hundreds of US citizens will be denied entry to occupied Palestine due to their ethnic background, religious and political views.
As Shapiro’s and Arraf’s situation unfolded over the past few days, it showed clear the utter disdain Israel holds for human rights defenders and the racism and inhumanity Palestinians face in regards to immigration, travel and citizenship. Arraf’s closing statements are telling of her dwindling hopefulness as she pronounces:
“I’m not sure that there is more to be done legally. We may try to challenge the ban, but this could take months or longer. Many of you have written to ask what you can do to help. Again, I don’t think that much can be done for us.”

Read more on Arraf and Shapiro here and here.