Clashes in Hebron continued on Friday 15th March, following the death of 25 year old Mahmoud Adel Tete in the nearby Al Fawar refugee camp three days previously. At around 3pm, one adult male and two boys were detained by soldiers in the Palestinian controlled H1 area, and were forced into the small terminal comprising Checkpoint 56.

The boys are aged around 9 and 11. They were held inside the sealed cabin with several soldiers for half an hour, with observers being denied access, despite repeated attempts made to ensure that the detainees were not being mistreated. All three had their hands zip-tied and the adult was blindfolded. 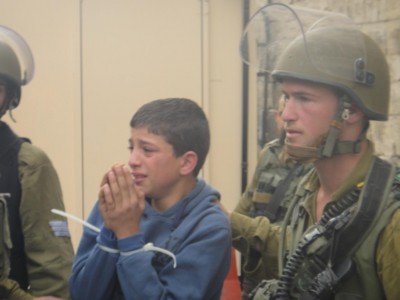 One of the detained children being taken to the army jeep.

The detainees were eventually removed from the checkpoint into a waiting army jeep. Soldiers stated that they would be taken to the police station. This brings the total number of Hebron citizens arrested in the last three days to eleven, none of whom have yet been released.

During the demonstration today, Israeli forces shot large amounts of teargas and rubber bullets at crowds of Palestinians protesting at the killing of Mahmoud Adel Tete, making repeated invasions into Palestinian controlled H1 area – which under the Oslo accords the Israeli army are not permitted to enter. They also invaded homes to use for further attacks on the resisting Palestinians. Several were wounded, including an international activist shot with a plastic coated steel bullet.