UPDATE:  Baha Adnan Imran 14 years old, who was arrested yesterday on his way home from school, is now being accused of throwing stones and carrying a knuckle duster. He will appear before Salem Military courts tommorow on the northern edge of Jenin.

Mahmoud Nasser Asaus (17) and Magdi Loai Najjar (24) were arrested last night by Israeli forces in the village of Burin and are now being held in Kishon Interrogation Centre in Haifa. Residents of Burin suspect this is the start of a wave of arrest following the Al-Manatir protest that took place In Burin at the beginning of February.

Several jeeps entered Burin at around 2.30am to raid Mahmoud and Magdi’s houses, taking them, handcuffed and blindfolded, to Huwwara military base. At 7am this morning they were transferred to Kishon Interrogation Centre where they are still being held. 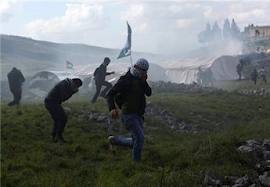 These arrests come after the neighbourhood of Al-Manatir was established on a village’s hilltop threatened with confiscation by Israeli settlers. The protest camp was aimed at denouncing Israel’s grab of Burin’s land and to recover the hilltop which has been inaccessible for residents of Burin since 2007.

However, the neighbourhood of Al-Manatir, made up of metal huts and tents, was violently evicted by Israeli soldiers and border police on the same day it was established. Israeli forces protected and accompanied settlers from the nearby settlements of Bracha and Yitzhar; while they were stealing metal huts and throwing stones at Palestinian activists. Simultaneously, around twenty settlers attacked several Palestinian homes on the outskirts of Burin and 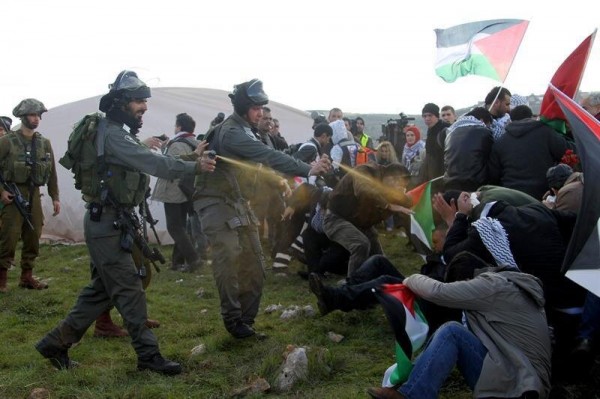 chopped down one hundred olive trees. When Palestinians ran to the area to defend their homes, stone throwing between settlers and Palestinians ensued. Zakaria Najjar (17), was shot in the right leg with live ammunition by a settler.

During the eviction, eight people were arrested and three of them remained in Israeli prison for twelve days, finally being released without charges. Further reprisals took place in Burin the days following Al-Manatir. Ghassan (23) and Mohammed (19) Najjar were arrested for several hours and interrogated about the protest camp. In addition, the village was sealed off by military checkpoints. The hilltop continues to be inaccessible for residents of Burin.

Following last night’s arrests there have been further incursions into the centre of Burin today. The Israeli army again tried to raid the village resulting in confrontations that began at around midday. Tear gas and rubber coated steel bullets were fired directly into the gathering crowd; as yet no serious injuries have been reported. A further arrest was made by the Israeli authorities, Bahar Adnan Imran who is just 14 years old.