Olive planting in Madama as part of international day of action

Today was the International Day of Action for the Boycott of Israeli Agricultural Products, with corresponding actions all around the world. 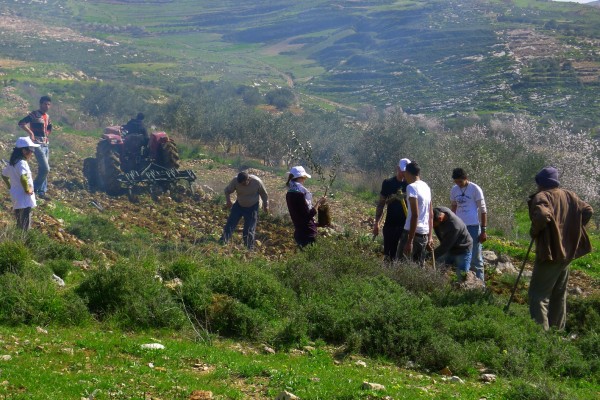 ISM-Nablus decided to show support for the people of the village of Madama by planting olive trees together with activists from the Yamen Culture and Social Center and farmers from the village.

Madama is a village of about 644 hectares and a population of 2500 people. Madama is located next to Yizhar, has been the frequent target of attacks by the settlement, including cutting down hundreds of trees and beating farmers. Settlers have fired upon villagers and, since 2011, three people have been killed. As is common throughout the West Bank, the settlement has seized lands from nearby villages, up to 100 hectares, and continues to do so. One of the most horrific stories coming out of Madama recently is that of the Nasser family who are being forced off their land near Yizhar.

Today a group of seven international activists joined the villagers of Madama to plant trees. The action was a success! In just a few hours the team planted the whole area they intended too. Of course, this triggered a visit by the Israeli Occupation Force, although today they chose not to interveen.