New
Home / Gaza / Day of action in Zeitoun, Gaza City and Madama, Nablus – A call from Palestinian farmers and fishermen

Day of action in Zeitoun, Gaza City and Madama, Nablus – A call from Palestinian farmers and fishermen

Gaza City Action: Meet 11 am in Zeitoun Neighbourhood, next to the Car Market “Souq Sayarat” and Al Handasya Company. The march will then begin from Malaka Cross towards the farmland near the Israeli frontier.

West Bank Action: Meet 10 am in Madama village, next to the mosque the farmers will then walk to the village land near Izthar settlement. 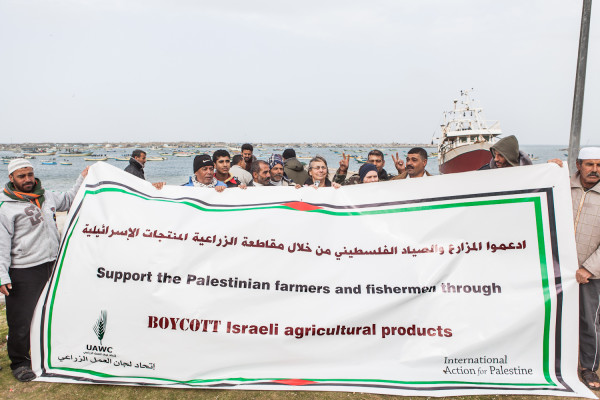 On this day at 10 am in the West Bank the villagers of Madama, the centre for the Martyr Billal Najar from Burin and International Solidarity Movement activists will plant Olive trees on the land of Madama village where illegal settlers cut down hundreds of olive trees. The village of Madama faces frequent collaborated attacks between Israeli settlers and soldiers. Settlers from Yitzhar are notoriously violent, regularly attacking Palestinian farmers and shepherds from Madama and surrounding villages whose land they want to take. When Palestinians try to defend themselves from these attacks Israeli occupation forces take over, attack the Palestinians and kill, injure or arrest them to keep them off their land.

“The daily aggression suffered by us the Palestinian farmers every day must be highlighted to the world, so people can understand the reality of the attacks and the suffering that has continued throughout the recent ‘ceasefire’. The boycotts of Israeli companies in agriculture are so important as the Israeli occupation has destroyed our farming production and denied us the possibility of exporting our own products. International pressure on Israel is the only way our own economy will be allowed to develop and for us to live normal lives.”

Zakaria Bakr, a fisherman from Gaza City who took part in a rally at Gaza Port on Wednesday:

“As some of the remaining Palestinian fishermen still able to fish, we urge all those around the world to launch campaigns to boycott Israeli Agricultural products and companies. Negotiations have for years only been a cover for making our lives worse. Boycotts are a peaceful activity and something that everyone can participate in. We have called for the boycotts because while our fishing industry, our communities and livelihoods have been destroyed by Israeli aggression, all of their industries have benefited from destroying and confiscating our land and violently denying our access to the sea.”

“I have been attacked injured and beaten by settlers many times while tending my flock. I was just imprisoned for six weeks because I was attacked by settlers on our land. The Settlers hit my face so hard they broke most of my teeth. My brother was shot and then arrested for trying to help me. All we want is to tend to our sheep.”

We ask the thousands demonstrating in over 30 countries and other people of conscience to grow the Boycott, Divestment and Sanction campaigns against the Israeli apartheid regime.