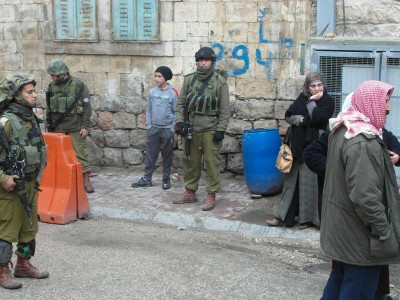 A 14 year old boy was detained at checkpoint 56 in Tel Rumeida, Hebron.

At 2 pm on 6th February Amir Ibrahim Shawar was taken by soldiers of the Israeli occupation forces near the Jewish cemetery in Tel Rumeida, Hebron. He was accused of throwing stones at the soldiers, he was then marched down to the checkpoint where he was detained for about an hour. Amir from Azaria near Jerusalem was on a family visit with his mother when the incident happened.

Whilst at the checkpoint the soldiers said to Amir’s mother, “We know he is not guilty but we want him to tell us who threw the stones”.

Members of the local community came to the checkpoint to complain about his detention and filmed the incident to help deter the soldiers from any unnecessary abuse of the teenager. One person filming the incident had his ID checked by a soldier. At one point Amir was grabbed by his coat and forced inside the checkpoint out of sight of his mother and family members causing concern about the boy’s welfare.