New
Home / In the Media / South Hebron Hills: 19 arrested in 24 hours including a mother and her 18 months old child [includes video]

South Hebron Hills: 19 arrested in 24 hours including a mother and her 18 months old child [includes video] 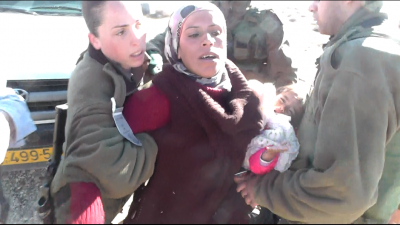 Israeli border police arrested today 10 Palestinians and five Israelis, including three women and a child, in the area of Um El-Arayes.  Four were arrested yesterday.

Today, Saturday, dozens of Palestinian residents accompanied by Israeli activists, arrived at their lands in the area of “Metzpeh Yai’r” outpost built on the lands of Um El-Arayes in South Hebron Hills. Israeli soldiers immediately declared the area a closed military zone and pushed the activists off the land.  In the process, they arrested ten Palestinians and five Israeli activists.  Yesterday, Friday, four Palestinians were arrested in the same area.

The nineteen arrestees included four Palestinian women, as well as a mother and her 18 months old child, three minors and an elderly man in his 80s.

The last few months have seen an escalation in the Israeli military’s policy to expel Palestinians and control access to their private lands in the South Hebron Hills.  This is contrary to the Israeli High Court and Military Legal Advisor’s claim that they will facilitate easy access by Palestinian landowners to their lands.