On the morning of November 28th, numerous soldiers came to the village of Susiya in the South Hebron Hills, unannounced from the nearby settlement, which is also called Susiya. The army jeeps and construction equipment came rolling in around eight o’clock and quickly went to work without giving any information as to why they were invading someone’s private land, and proceeded to demolish a tent in the village.
Esha Ishboal erected a tent two years ago so that his workers could have some shade while picking olives on one of his families’ properties in Susiya, which is south of the city of Al Khalil (Hebron). It was a simple structure, not dirty or old. It had a metal frame and was almost always open on all sides but one, just enough to block some wind. Here Esha would invite his friends to have tea, or as in my case he’d ask a stranger if they would like some hospitality. That was the situation on his farm a couple weeks ago at least.
The table and chairs were spared but the tent itself was leveled. This was an especially lazy demolition since it wouldn’t have taken a bulldozer to bring the tent to the ground. A couple of soldiers could have done it in less than half an hour. 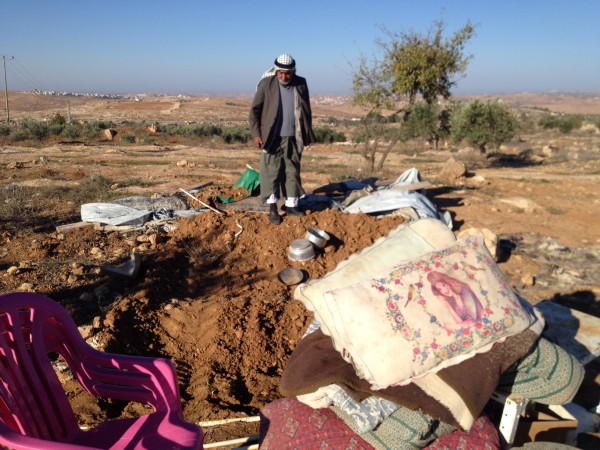