More evictions for army training in the Jordan Valley

5am in Homsa in the northern Jordan Valley. Abdullah 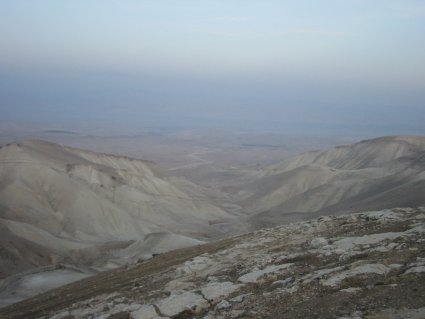 Ghanni, his family and his livestock are on the move under the watchful eyes of the Israeli Army. Two days earlier Ghanni had received a visit from soldiers informing him that military training would take place on land belonging to him and his fellow villagers. Ghanni and five other families were evicted from their land for the duration of the training – 7am to 5pm on the 9th December and 5am to 1pm the following day. All people in the village and their animals were required to leave.

Palestinians in the Jordan Valley of occupied Palestine are long-suffering. Ghanni has been farming this land for 40 years, primarily raising sheep. For all that time the Israeli Armyhas exercised total control over life. Temporary evictions for the purpose of military training are frequent here. Just three weeks ago the inhabitants of Homsa and two other nearby villages were evicted for two days to accommodate large-scale training manoeuvrers performed jointly by the Israeli and US armies. In the past, unexploded ordinance has been left after such drills, resulting in death and injury to children.

A visit to the northern Jordan Valley is a study in contrasts with the inequalities of the occupation laid out in the starkest terms. On the one hand, Israeli settlements are tidy villages of concrete houses. They are surrounded by plantations of grape vines, neat fields of vegetables, rows of greenhouses; a rich fertile green enclosed by double layers of barbed wire fences and floodlights.

On the other side of these fences, the nearby Palestinians struggle to cling to the remnants of their homeland. Villages here are often little more than a collection of makeshift tents yet, despite appearances, the Palestinians here were never nomadic Bedouins. They had homes, farm buildings, wells and water tanks. Designated Area C, large swaths of the Jordan Valley are under direct Israeli governance and military control. Building is forbidden and home demolitions are a common occurrence. The village neighbouring Homsa – Hadidia – had their stone houses demolished just last year.

If losing their homes wasn’t hard enough, the Israeli settlements and soldiers confiscate water resources. Valuable springs have been taken over and fenced off for the exclusive use of Israelis. Ghanni must travel 40km, past the Hamra checkpoint at the entrance to the Jordan Valley, to get the water he needs for his farm. This is despite the factthere is a spring less than 2km across the valley from his farm, in the Hadidia village. That water is forbidden to the Palestinians, despite it existing far outside the boundaries of any settlement or army base.

An elder in Hadidia pointed out two large tents his village erected to house the people of Homsa over the past two days. The Israeli Armydo nothing to assist the people they displace. No temporary housing, no assistance moving large herds of animals in the early morning. The army do, however, trail behind the villagers in jeeps on their trek across the valley, honking at the animals to hurry their progress,making the herding harder still. They also threaten Ghanni that they will create problems for his family with the settlements if they do not move as told. The frequent evictions disrupt normal family life. Each time, Ghanni is forced to send five of his eleven children to stay with another family close to the Hamra checkpoint so they can continue attending school.

Disturbingly, for Ghanni and the Palestinians in the valley, these incursions and disruptions of life, despite the feelings they provoke, have come to be accepted as normal. Since their 1967 occupation of the West Bank, Israel has deliberately made life in the Jordan Valley as difficult as possible in an attempt to force Palestinians from their land. The Palestinian population of the Jordan Valley prior to 1967 was 320,000. Now it hovers at 56,000. Despite the hardship involved in remaining, Ghanni and his family refuse to leave the land he has known all his life. A move elsewhere holds no promise of any kind of certainty, the fact he remains means his everyday life is a living resistance.