New
Home / In the Media / An appeal to the international community to save the lives of Palestinian administrative detainees on hunger strike, al-Sharawna and al-Eissawi

An appeal to the international community to save the lives of Palestinian administrative detainees on hunger strike, al-Sharawna and al-Eissawi

The Palestinian Centre for Human Rights (PCHR) expresses extreme concern over the fate of Ayman al-Sharawna and Samer al-Eissawi, who have been on hunger strike in Israeli jails. PCHR holds the Israeli Occupation Forces accountable for these lives, and calls upon the international community to exert pressure on the IOF to immediately release al-Sharawna and al-Eissawi. 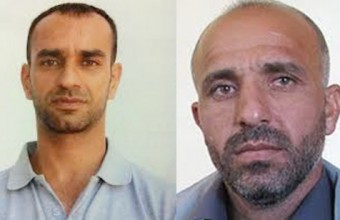 Ayman al-Sharawna, 36, from Hebron, and Samer al-Eissawi, 33, from Jerusalem, have now been on hunger strike for 173 days and 143 days respectively. Al-Sharawna started the hunger strike on 1 July, while al-Eisswi, started it on 1 August, in protest against being re-arrested and placed under the administrative detention. The two detainees were released in the context of the prisoners’ swap deal between Palestinian armed groups and Israeli authorities in October 2011, under which 1,027 Palestinian prisoners were released in exchange for the captured Israeli soldier, Gilad Shalit.

According to various human rights sources, the health conditions of the two detainees are continuously deteriorating because of the long periods of their hunger strikes, and they have recently abstained from drinking water. They suffer from various health problems, including leanness, general weakness, anemia, protein shortages, sugar shortage, deteriorated visions, and others. Their lives are at stake.

In spite of their serious health conditions, Israeli authorities have refused to release al-Sharawna and al-Eissawi, and exerted heavy pressure on both of them to stop their hunger strikes, in exchange for departing them abroad, but the two detainees have rejected these attempts and have insisted on continuing their hunger strike demanding their release to their homes.

In another development, on Wednesday, 19 December 2012, Israeli soldiers violently beat al-Eissawi in Jerusalem courtroom during the hearing held for considering the appeal to release him on bail or placing him under house arrest until his trial is concluded. The Israeli soldiers attacked al-Eissawi and his family members who came to see him, although he entered the courtroom on a wheelchair and handcuffed as he is unable to walk because of the long period of his hunger strike. They pulled al-Eissawi out of the courtroom and transported him back to Ramla Hospital. Additionally, Israeli forces raided al-Eissawi’s house and arrested him sister, Shirin al-Eissawi, who was presented to a judge. She was released yesterday, but was placed under house arrest.

PCHR has extreme concern over the fate of al-Sharawna and al-Eissawi, who are on hunger strike in Israeli jails, and seeking to save their lives:

1. Calls upon the international community to exert pressure on the IOF to immediately release them, in order to save their lives.

2. Calls upon human rights organizations and international solidarity organizations to put an end to the misuse of administrative arrests by the IOF, based on the term of ‘unlawful combatant,’ in violation of the fundamental right to a fair trial.

3. Notes with grave concern the deterioration of living conditions of more than 4,700 Palestinian prisoners in Israeli jails.