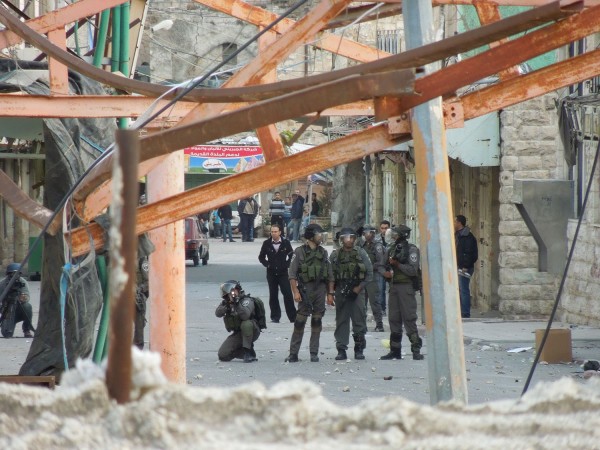 Ibrahim Abu Eisheh, a Palestinian youth was hit in the head by a tear gas canister at around six in the afternoon. He is in critical condition at a hospital and is currently undergoing surgery.
For the third consecutive day in Hebron there has been a large amount of Palestinian resistance in the old city against the Israeli occupying forces. Two streets in particular were hardest hit by the conflict.
One being one of the main streets in the souq where most of the fresh produce is sold in the city. The other road intersects the market street and runs north of the military gate that is used for entry during Saturday settler tours. This area is known as Bab Baladia and was the main fighting ground for the shabab; which is the name for young Palestinian males.
Today not only were multiple tires burned but a couch was set aflame. Firecrackers are also a favorite for these demonstrations, which briefly give the tiring struggle a whimsical edge.
Though rocks are obviously dangerous when used as projectiles it’s extremely rare that one gets close enough to the soldiers to be considered dangerous, plus they have armor and padding.
The Israeli army responds to the relatively symbolic acts with rubber coated steel bullets and tear gas canisters that are shot at high speeds from their machine guns. Yet apparently this isn’t enough to combat untrained civilians that are predominantly in their teens. A skunk water truck came out of the Israeli installation and went into H1, which according to the Oslo accords is supposed to be in full Palestinian control.
The disgusting material was sprayed into the food market and the Palestinian homes that reside above it. Israeli army personnel have also been trying to break into private residences so as to gain access to the roof for tactical advantage. At one point six border police raided a building, as they shut the front entrance door other border on the outside broke off the handle so nobody else could enter. There have also been several detainments of Palestinian youth that are given no reason as to why they are held while they are blindfolded and cuffed.
All of this activity inevitably ends up in injuries, today was certainly no exception.