Gazans return to the “buffer zone” 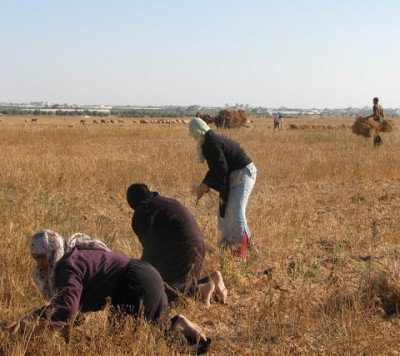 After years of being barred from their land, Gazan farmers celebrate their ability to return. Once the terms of ceasefire were announced thousands flocked back to their property that has been vacant for eleven years, though many are still understandably wary.

Jaber Abu Regaleh, who is a farmer from Farahin (which is near the border of Gaza and close to the former buffer zone) said:

“We are celebrating. Everyone, young men, young women, old people, we are all outside walking on our land along the border. I am near the fence now.
There is ten meters between me and the Israeli jeep. We have a lot of work to do to repair the destruction caused by the occupation, but we will till the land and plant it. We will renew the agricultural land so it is as it used to be. This is better than a holiday for us.”

The killing of twenty one year old Abdelhadi Qdeih and wounding of nineteen others by the Israeli military a day after the ceasefire has left other residents scared of returning.

Naser Abu Said lived in Jaher al deek near the border of Gaza with his wife, Naama and five children. Naama was killed and the children injured by Israeli artillery on the 13th of july, 2010. “We were living a good life before they shelled our house. Our two year old son was outside as his mother ran to get him. She was shot with a shell that scatters pieces of metal. The army didn’t allow an ambulance to approach her for four and a half hours while she died.” Nasser’s house was demolished and children and relatives injured when the house was shelled again on the 28th of April, 2011. “ We are still afraid, we cannot believe what has happened. We have not gone back to the land yet. If the israeli soldiers shoot and kill you there’s no one held accountable. We are waiting to see what happens.” Said Nasser.

The Buffer Zone was a no-go zone imposed by Israel, starting at the border fence and extending into Gazan territory to which Palestinian access was denied. Israel treated this border area which contains much of Gaza‘s most arable land as a free-fire zone. Any Gazan resident entering the zone risked death or injury. Israeli troops invaded regularly, including armoured columns and kept the lands razed of any built-up structures or agricultural activity. Israeli Occupation Force aircraft dropped leaflets warning residents not to move within 300 metres of the border fence. In reality however, Palestinians have been shot up to two kilometres from the border fence.