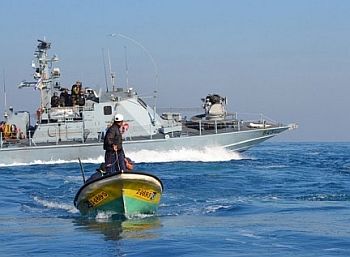 Fishermen in Gaza are able to fish six miles from the shore for the first time since 2006 after the ceasefire between Israel and Gaza. Fishermen hope the fishing industry will recover after its almost complete destruction by the siege but say that 6 miles is not deep enough.

Abu Alaa El Amoudi, (A fisherman in the Gaza strip): “Since October 2000 when the Second Intifada began until now the Israeli military do not allow us to enter the sea 3 miles past Gaza beach. Our work was at 3% of our usual capacity and even that was very dangerous. Thank god, the situation now is better than before the war, now we can move to 6 miles but if we go deeper the Israeli military shoots at us. We wish as fishermen in Gaza Strip to work freely.”

Raed Abu Odai (A fisherman in the Gaza strip) : ‘’Six miles is a big improvement but there are still not enough fish. To catch more fish we need to go deeper. Yesterday I went in seven miles and was shot at by the occupation’s navy with live ammunition and a water cannon but thank god no one was hurt.’’

The Israeli forces illegally reduced the area of fishing gradually from 20 nautical miles, which was established under the Oslo Accords, to 10 nautical miles in 2005. In June 2006, IOF imposed a total siege for months, and opened it later permitting fishermen to fish within a 6-nautical-mile limit, which was then reduced to 3 nautical miles in 2007. Israeli forces continue to attack Palestinian fishermen even within the 3 nautical miles since 2009. Fishermen are subjected to shootings, resulting in deaths and injuries, they are often chased, arrested, unnecessarily inspected, humiliated, and their boats and fishing equipment are confiscated, and sometimes drowned or destroyed by the Israeli military