Waed Bassim Tamimi, a 15 year old boy was hit in the side of his body by a tear gas canister in Nabi Saleh today. There was excessive use of live ammunition by Israeli forces in and around the village during the weekly non violent demonstration against the illegal occupation of their lands.

The people of Nabi Saleh gathered in the main square of the village at 12 noon after Friday prayers. Men, women and children walked down the road to the military checkpoint a few hundred meters outside the village chanting and clapping along to slogans amplified through a megaphone. Everyone was in good spirits, following a large Palestinian flag carried by children. The demonstration was then halted at a road gate.

A Skunk Water Truck pulled up to the opposite side of the gate and sprayed into the crowd a foul smelling chemical fluid. Immediately after, volleys of tear gas canisters were fired into the demonstration. The demonstrators gathered on the hill and tried to make their way to the village spring at the bottom of the valley underneath the illegal Israeli settlement of Halamish. More and more volleys of tear gas and many rubber coated steel bullets were fired at the Palestinian demonstrators for about two hours.

At 3pm the people of Nabi Saleh walked down a different road to try and reach their spring. This was the time that Waed Bassim Tamimi was hit in the side by a tear gas canister injuring the side of his body. Waed, aged 15, was on a road between houses inside the village when he was hit. He was treated by people from the village who said he was “taking the injury bravely and did not want to make a fuss.” During the last three years that Nabi Saleh has been holding its weekly non violent demonstrations Waed has been hit five times by tear gas grenades or rubber coated steel bullets.

At 3.45 pm the village was rocked by the sound of the sharp crack of live ammunition being fired. Some demonstrators had managed to make their way down the hill towards the village spring. A group of Israeli soldiers were in the field below and fired at least twenty live rounds in a couple of minutes at the demonstrators.

The Israeli Military then blocked the road behind them (route 465) stopping all Palestinian traffic from passing. Other roads had been blocked by the Israeli Military effectively sealing off Nabi Saleh and preventing people from leaving or entering the village. Over sixty Palestinian cars were backed up at the soldiers impromptu roadblock, Israeli cars were waved through. For the next hour Israeli soldiers continued to fire live ammunition at the demonstrators trying to reach their spring. At 4.45pm the demonstrators returned to Nabi Saleh.

Nabi Saleh has been holding weekly non violent demonstrations after Friday prayers since 9th December 2009. The village, which is about 20 kilometers north west of Ramallah has had its land occupied and stolen by the illegal settlement of Halamish (also known as Neveh Tzuf). The settlers from Halamish sized control of the natural spring of ‘Ayn Al Kus from privately owned Palestinian land in the summer of 2008. The natural spring is a valuable source of water for Nabi Saleh.

During the three years of non violent resistance over 130 people have been arrested, many of them children. Children have been kidnapped by the Israeli Military and Police in the middle of the night causing much trauma and distress. Some of the children have resorted to sleeping fully clothed in fear of being arrested and detained in the night. The village employed a psychologist for a year because of the trauma suffered by their children.

The villagers of Nabi Saleh estimated that 1500 tear gas grenades were fired into their village in just one Friday alone. 33 houses have been partially burnt by tear gas canisters. Skunk Water has been sprayed into houses and at water tanks.

Mustafa Tamimi was fatally injured on December the 9th 2011 when he was shot in the face at close range with a tear gas grenade. Just last month Omar Tamimi was shot in the abdomen with live ammunition and arrested. The people of Nabi Saleh still turn out in large numbers every Friday to fight for justice knowing the risks they face, a considerable achievement for a village of approximately 550 people.

Although the village demonstrates specifically about access to their spring and the theft of their land: they say the main reason to build a grass roots non violent popular resistance movement is to protest against Zionist ideology and the illegal occupation of Palestine by Israel.

A message from the children of Nabi Saleh:

“We are still under occupation.” 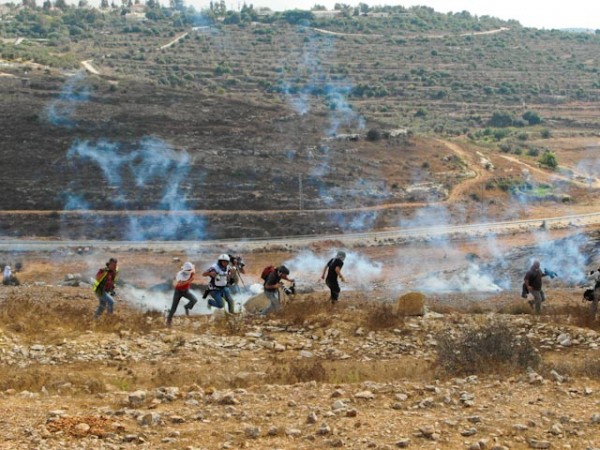