By Jacob Singh and Leila James

A group of Palestinians shut down an Israeli-only highway to Tel Aviv today in the West Bank. International activists supported the Palestinians at today’s peaceable action, which blocked Route 443 for approximately thirty minutes. 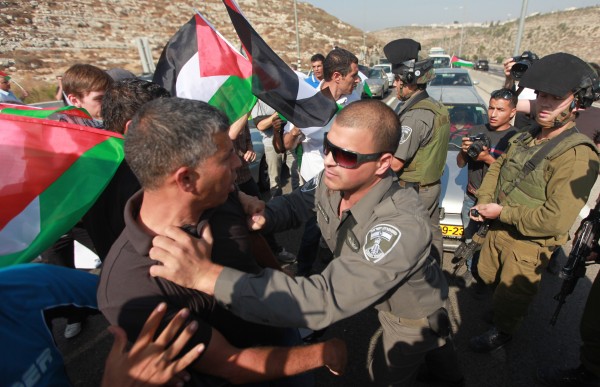 Israeli border police puts his hands on a man at the action to shut down Route 443.

Fifty Palestinian and roughly ten international activists blocked the highway near Beit Ur, west of Ramallah during the demonstration, which was organized by the Popular Struggle Coordination Committee. The non-violent protesters held aloft Palestinian flags and placards in Hebrew and Arabic denouncing “settler terrorism”.

Also known as Modi’in Road, highway 443 is open to Palestinians only for a short section of its length. The vast majority of it is controlled by checkpoints to ensure that only those with Israeli citizenship are able to travel using it. 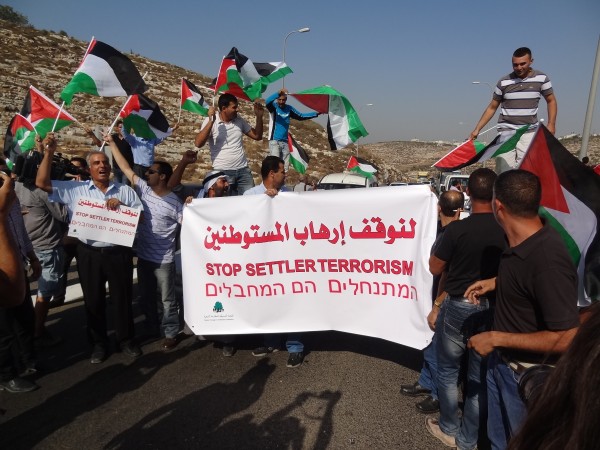 Responding to the roadblock, Israeli soldiers violently and forcefully broke up the protest. Soldiers injured five activists through the use of pepper-spray and a number of others through brute force. The soldiers also threw dozens of sound grenades directly at the feet of protestors, causing one to lose consciousness briefly.

The demonstration comes at a time of increased attacks by extremist settlers on Palestinian agricultural workers, particularly against those that have been taking part in the olive harvest. The last three weeks have seen violent attacks against Palestinian farmers and their land, including the burning of olive trees, the theft of harvested olives and group-invasion of villages in the agricultural areas around Hebron, Nablus, Bethlehem and Ramallah.

A photojournalist wearing clearly identifying clothing was sprayed at close-quarters with capsicum-based pepper gas and a Palestinian protestor was kicked in the back of the neck by soldiers. He was detained for an hour and then released.

The demonstration ended when soldiers forced protesters away from the road. Protesters at the demonstration said that the violence shown by the Israeli military forces was a testament to the effectiveness of today’s action.

Jacob Singh and Leila James are volunteers with the International Solidarity Movement (name has been changed).