Three people – one Palestinian man, another man from Jordan and one Israeli activist were arrested on Friday 12th October in the village of Kufr Qaddoum. Ahmad Badiya Amer, 21, from Jordan, was visiting his cousin, 28 year old Ahmad Abed Fatah Amer, who lives in Kufr Qaddoum. They were reportedly kidnapped from their home, during the regular Friday demonstration which they had not attended.

The Israeli activist was arrested during the demonstration, during a time of Israeli military invasion of the village – the soldiers made repeated incursions into the village in an attempt to arrest demonstrators. Two houses were invaded and occupied by the soldiers, providing a vantage point for them to attack locals. This prompted local youth to attempt to drive them out of the village by throwing stones.

An Israeli army bulldozer and skunk truck were driven further into the village than ever before in the history of the demonstration. After firing skunk water into civilian areas, the Israeli soldiers eventually retreated.

The occurrences of today continue a worrying trend of Palestinians arrested from their homes, facing accusations of having attended demonstrations. For example, Kufr Qaddoum villagers Majd and Abdelateef Obeid were arrested three weeks ago, from their home – where reportedly one of the men had been sleeping and the other had been eating lunch with his family.

The village of Kufr Qaddoum holds regular Friday demonstrations to protest the 12 year closure of the most direct road route to the nearest city of Nablus. This road is now only accessible for illegal Israeli settlers. The demonstration has now been going on for over a year and over 30 inhabitants of the village are currently still in Israeli custody, accused of attending demonstrations. Many of these people have been arrested in the night or from their homes. The status of those arrested today is currently unknown. 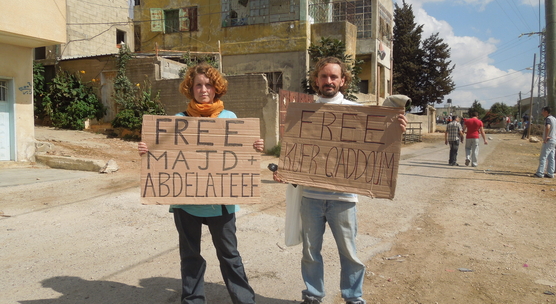 By Ellie Marton (Ellie Marton is a volunteer with the International Solidarity Movement (name has been changed).