In 2008, the Israeli army annexed a spring that belonged to the Palestinian village of Yatma, providing fresh water to the village for free. This theft has severely limited the village’s access to water, as the majority of the output of the spring is now diverted to the illegal Israeli settlement of Rechelim, immediately adjacent to Yatma. This settlement is over 25 kilometres into the Palestinian territories and is condemned by International law according to Article 49 of the Fourth Geneva Convention. 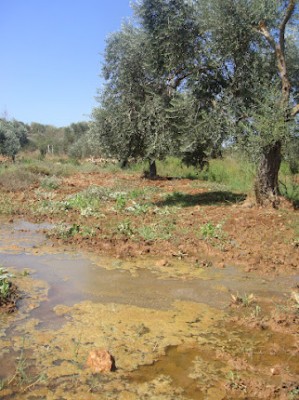 A Palestinian owned field in Yatma, that has been flooded with water and destroyed.

The Yatma village council stated that for two to three days a week, the 3000 residents now have no access to water. The villagers are now forced to buy back the water, as well as electricity, from Rechelim. Whilst the Israeli government subsidises the cost of living, including water and utilities in illegal West Bank settlements (in order to encourage so-called ‘economic settlers’ to Palestinian areas), the Palestinians are charged at much higher rates, which place a heavy burden on villages in these agricultural areas . The cost of water for Yatma for one month is 8000 NIS (around 2000 USD).

A natural source of water on Yatma village land has also been polluted by settlers, damaging olive trees and attracting insect pests. The villagers also reported problems with settlers driving animals, including dangerous wild pigs, onto their land, destroying crops and property. Farmerssaid they experience regular attacks by settlers from Rechelim, especially during the olive harvest, and the Israeli army is present in the village most nights, intimidating villagers and conducting night raids on Palestinian houses. 40 residents of Yatma have been arrested since January 2012, half of whom are under 18.

Limiting access to water is one of the strategies that is used in the Occupied Terrotories to force Palestinians from their land.

Ellie is a volunteer with the International Solidarity Movement (name has been changed).