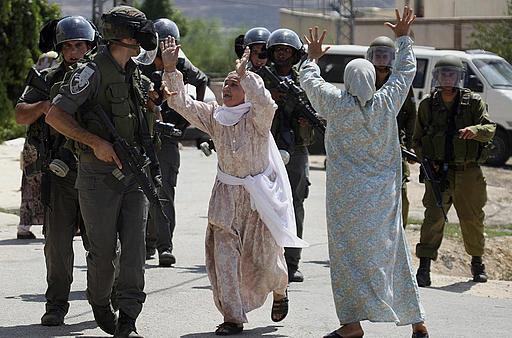 Firas Nahar Jama, 15, was arrested after Israeli soldiers invaded the village of Kufr Qaddoum during the weekly demonstration.

Mahmood Nasir Batahan (10) was taken to the hospital after being hit by a tear-gas canister. Two others were treated on the scene after inhaling large amounts of tear-gas.

The purpose of the weekly demonstration in Kufr Qaddoum is to protest the closure of the main road that connects the village with the city of Nablus. The road, which passes alongside the nearby illegal Israeli settlement of Kedumim was closed for Palestinian access and is only open to illegal Israeli settlers. As a result, the journey to the nearest city has increased from 15 minutes to 40 minutes.

Kufr Qaddoum has also lost 4,000 durums of land to the 5 illegal Israeli settlements that surrounds the village. Farmers seeking to reach their lands face threats, attacks, and arrests. Some of the Palestinian-owned agricultural land has been declared as ‘closed military zones’, and Israeli settlers regularly sets fire to them.

Paddy Clark is a volunteer with Jordan Valley Solidarity.