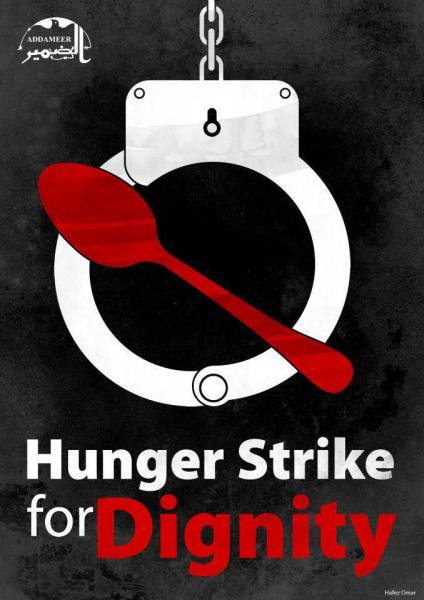 According to Addameer lawyer Fares Ziad following his visit to Ramleh prison medical clinic on 30 August, Samer was too weak to meet with him and could not get out of bed. Mr. Ziad met with Hassan and fellow hunger striker Ayman Sharawna, who is on his 65th day of hunger strike today. During their visit, Hassan told Mr. Ziad that both he and Samer had recently been taken to Assaf Harofeh hospital for a few days due to the further deterioration of their conditions and doctors informed them that their lives were under immediate

Hassan is experiencing such extreme fatigue that he is unable to sleep, and instead falls unconscious 2-3 times each day. Due to slow heart rate and severe potassium deficiency, Hassan was taken to Assaf Harofeh for testing from 27-29 August. Hassan was told by the doctors in the hospital that the tests revealed that his immunity level has fallen dangerously low; there is fluid in his lungs; and he has developed problems in his liver and kidneys including  kidney stones. He is also experiencing chronic pain in his upper waist and

While in the hospital, Hassan was shackled by all four limbs to the hospital bed. He noted that four soldiers were in his room at all times and that they made as much noise as possible and ate and drank in the room. When he asked them to be quieter, they simply mocked him. After receiving the results of his tests, doctors in the hospital told Hassan that the full responsibility of his condition lies on Hassan since he refuses to break his strike. Addameer, Al-Haq and PHR-IL categorically hold Israel accountable for Hassan and the other hunger strikers’ current

During his visit with Ayman Sharawna, Mr. Ziad learned that prison doctors informed Ayman that his life is also at risk. Ayman noted that in addition to very low immunity levels and cirrhosis in his liver, he suffers from terrible joint pain and back pain from previous chronic conditions, and that the IPS doctors refuse to give him pain medication until he stops his hunger strike. According to Ayman, the pain is so severe that he has been unable to stand on his own since the middle of

During the visit of PHR-IL lawyer Muhammad Mahajne on 28 August, Ayman reported experiencing constant vertigo, severe headaches, high blood pressure and extreme weight loss of about 28 kilos from his original weight. Ayman also reported that he was taken to Assaf Harofeh hospital three times during his hunger strike, and that he was told that he is starting to develop a kidney

Furthermore, Ayman reported that during each hospitalization he was shackled to the hospital bed by three limbs, humiliating treatment that is also extremely uncomfortable and prevents Ayman from moving freely in his bed. Ayman is still denied access to an  independent doctor as well as family visits. All three hunger strikers are now held in the same isolation cell in

Akram Rikhawi ended his hunger strike on 22 July after 102 days, upon reaching an agreement with the IPS to be released in January 2013. Following a visit to Akram on 25 July, the PHR-IL doctor recommended Akram’s immediate referral to a public hospital and to be immediately examined by a lung specialist. To date, this recommendation has not been implemented. Even more alarmingly, Akram reported that the IPS has raised his steroid dosage, which he is given as treatment for his asthma. Akram’s asthma continues to be a cause for concern and is severely unstable despite treatment with steroids. The doctor emphasized that asthma is a life-threatening illness that in the case of a major attack could lead to

Samer is now the longest hunger striker in Palestinian history. He and Hassan have reached very critical stages in their prolonged hunger strikes, with doctors noting that they are at immediate risk of death. Nonetheless, Israel not only insists on the injustice of depriving them of their right to fair trial, but also continues to severely mistreat them, in the forms of physical brutality and psychological torture that is employed by the Israeli Prison Service (IPS) to get them to break their

In light of the severe deterioration of the health conditions of the remaining Palestinian detainees on hunger strike, Addameer, Al-Haq and PHR-IL urge the international community to immediately intervene on their behalf and demand: