Al Mufagarah: Cave dwellers struggle to remain on their land

In the peaceful landscape of the South Hebron Hills, the occupation of the land is a daily struggle. Whilst life seems to be quiet and smooth the Palestinian communities often have to forget their daily life problems to focus on a bigger issue: resisting expulsion from their land. 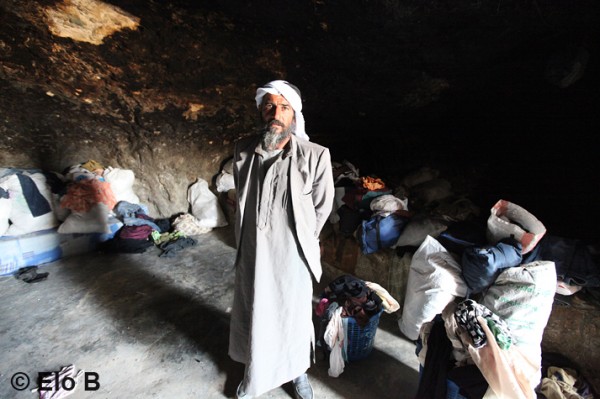 As does 60% of the Palestinian West Bank, the South Hebron Hills lies in Area C, meaning it is under complete Israeli civil and military control. Palestinians residing in Area C live under harsh conditions, facing land confiscations, house demolitions, and access to water and electricity.

Furthermore, a 7.5 acre area within the district of Masafer Yatta, including 12 Palestinian villages, were designated in the late 1970s by the Israeli Occupation Forces as ‘Firing Zone 918’, a closed military zone. In 1999, evacuation orders were issued to remove the inhabitants of the villages, claiming that they are non-permanent residents and ignoring their ancient culture.

In Al Mufagarah, the 15 families are living in caves, tents, and a few stones houses. As their ancestors have been doing for ages, the families farm and graze. Its population, originally from the nearby village of At-Tuwani moved 4 kilometres south to set up the village of Al Mufagarah by the end of the British Mandate. At first, it seemed that nothing had changed. Secluded on a hillside, Al Mufagarah is accessible only by a rough dirt road. It stands quiet, facing the Naqab desert. 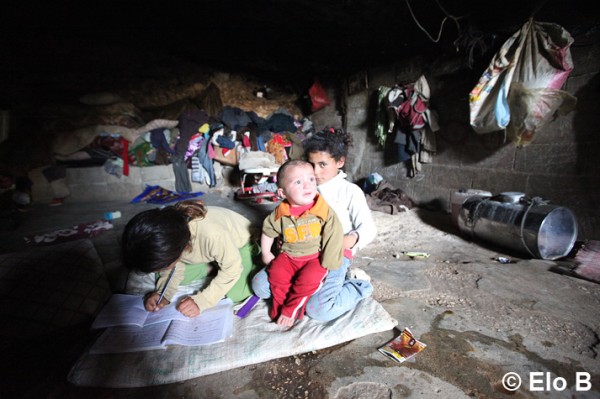 Its 160 residents, as do the 12 other hamlets of the firing zone, maintain a unique way of life with many living in or beside dug caves. Studies have shown that cave dwellers have been living in the southern Hebron hills since at least the 1830s. As families expanded, they build tents and a few stones houses. The community relies for its livelihood on growing grain and olives, husbandry of sheep and goats, and on the production of milk and cheese.

“Unfortunately, nowadays, we are facing issues my grand-father would have never expected!” said Mahmoud. “We started building a few stones houses in the ’80s; but then, with the expansion of the 4 nearby settlements, the Israeli Civil Administration wouldn’t deliver building permits anymore.

Even though in 2007, I decided to build a 60m² bricks house on the top of my cave because it is too small for my wife and my 14 children. But the 24th November 2011, the Israeli bulldozers came and destroyed my house as well as the mosque and the container for the collective power generator.” 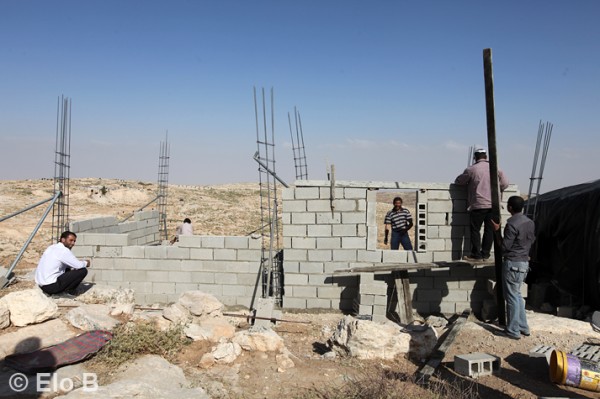 Most of the villages of the South Hebron Hills have been forcibly displaced or demolished, often times with the building of new settlements. Moreover, according to the Israeli non-governmental organization Peace Now, between 2000 and September 2007, 94% of the building permits requested in Area C by Palestinians were turned down. While only 91 permits were issued to Palestinians, 18,472 new homes were built, illegally by international law, in order to expand the Israeli settlements in the West Bank, which currently house 400,000 settlers.Heavy restrictions on freedom movement, work and business isolate these communities and have increased poverty among the population.

Furthermore, the closed area has no physical infrastructure. There are no paved roads leading from the villages. They are not linked to a power grid, telephone lines, a running-water system, or a sewage system. The normal water supply is rain, saved from the rainy season. Although the water table in the area is healthy enough to be able to build a well, the military does not permit this. Even building a structure for rainwater catchment is forbidden. As the rain water does not last through the dry season and the inhabitants have to spend roughly 10-15% of their income to buy water, brought by tanker from an Israeli company, Yatta.

The community attempted a few years ago to run electrical lines from At-Tuwani village but it was, as always, shut down by the military. Nowadays, only Mahmoud has a small power generator that he uses strictly from 7-10 p.m., and all activities needing electricity are coordinated into this time. This includes using the washing machine, charging cellular phones and flashlights, as well as watching their favourite soap opera. 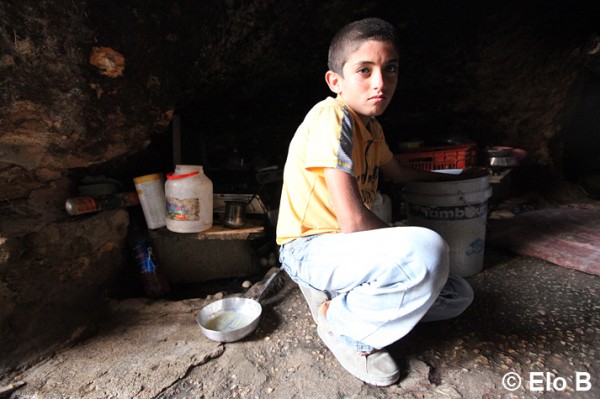 “We are harassed on a daily base by settlers, soldiers, police, and border police. But I am determined to behave the opposite way of their actions. We will get Al Mufagarah back on the map and bring its people from the caves within to the outside in houses,” Mahmoud says.

On 19 May 2012, the community of Al Mufagarah, supported by the Popular Struggle Coordination Committee, launched a campaign called ‘Al Mufagarah R-Exist’, to build 15 bricks houses. Every Saturday since the launching, Palestinian, Israeli, and International activists have gathered to build the houses and support the community in its struggle to remain on its land.

On June 10, after only 3 houses had been completed, Al Mufagarah received orders from the Israeli Civil Administration to halt construction. On July 16, a demolition order was received concerning the first house built, which should be implemented within 3 days.

Like Susya and many other villages from Area C, the existence of this community is jeopardized. 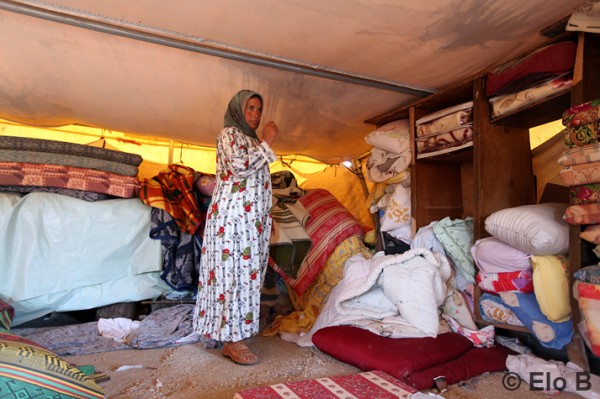 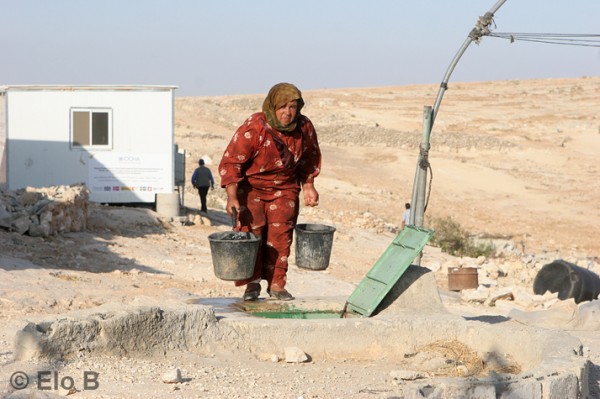 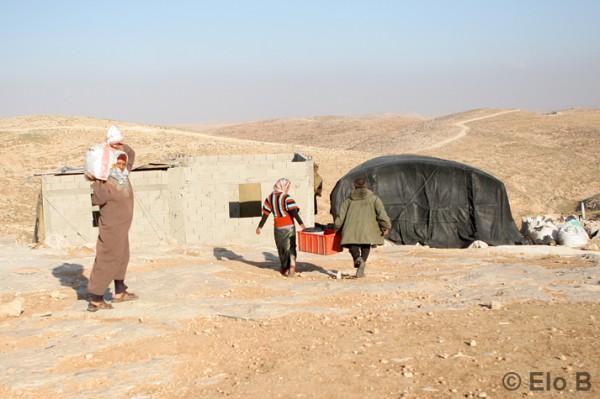 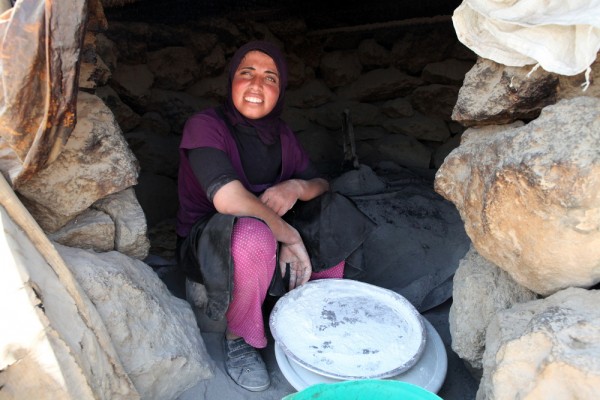 VLR is a photojournalist based in Palestine since 2011 reporting life under occupation.

This article was originally published with an error in the name of the village Al Mufagarah. It was corrected from Um Fagarah to Al Mufagarah on 30 July 2012.