The Israeli Occupation Forces (IOF) violently suppressed the weekly demonstration at Kafr Qaddum on Friday the 6th of July, injuring one man, and arresting another. Majid Joomaa, 40 years old, was arrested as the IOF stormed the village. Joomaa, who is a father of ten, was unable to flee from the advancing soldiers due to a prior injury in his leg. Another man suffered from overexposure to tear gas, and was carried to an ambulance after he collapsed. 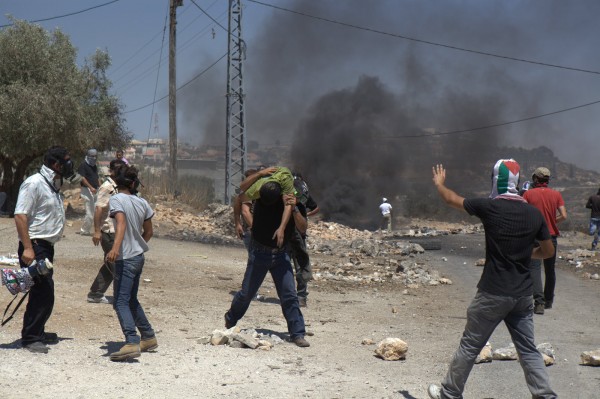 The injured Palestinian man being carried to safety by another peaceful protestor.

Next week marks the one year anniversary of the popular demonstrations against the Israeli Occupation in Kafr Qaddum. In 2003 the IOF closed the main road that connected the small village with Nablus, which lies only 13km away.  Palestinians are forced to drive around the illegal settlement of Kedumim, which was erected in 1975, extending their journey by 22 kilometers instead of the usual 10 to reach Nablus.