On the sixth day of Israeli attacks on Gaza

The sixth day of Israeli attacks on Gaza.

Ali Al Moutaz Shawat was 5 and a half years old. 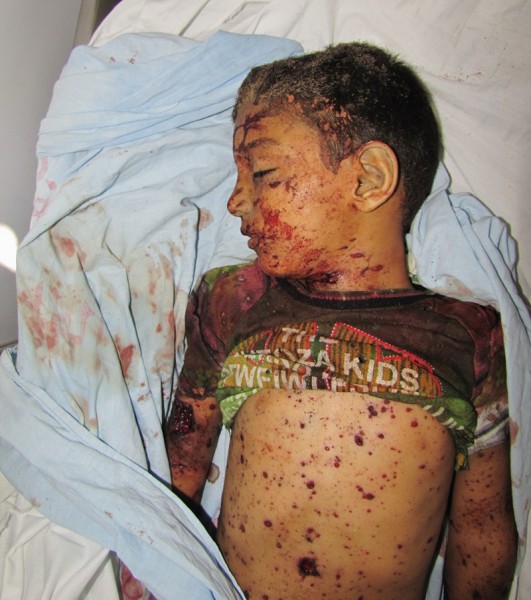 Ali’s father was in the operating room. I went to visit other people injured in this attack, a number of whom were hospitalized at the European Hospital in Khan Younis.

Msabah Zaki, 53, was wounded in the shoulder. I met him at his home. Zaki began to tell me what happened.

Young people and families usually gather in the location that was attacked by the Israeli tank on June 23. There is a soccer field where young people have a league, there are ping pong tables, and a television to watch the game on. Today there was supposed to be a football match between some young groups. Zaki worked there and arrived early in the morning to clean and prepare everything. Some friends joined him to help. Two men with two kids asked him to open the room so they could play ping pong. Suddenly, at about 10:15 a.m., Zaki heard a huge explosion from the direction of the ping pong room.

“I flew a few yards away,” says Zaki. There were no warning shots before the attack. The situation was calm, quiet.

In the hospital I met the 2 men who entered the ping pong room, Omar Tabash, 28, and Yosif Abu Tair, 24.

Omar was wounded in the arms and in his right leg. He says that he went to play ping pong, and brought his son Ayoub, a month and a half old. His friend Moutaz Shawat joined them with his 5 year old son Ali.

“Ali was speaking on the phone with his mom,” says Omar. Young Ali was saying into the phone, “mom, I want to see you,” to which his mother replied, “now I am at work, I will see you later at home.”

Ali’s father wanted to go home to change into sports clothing. He went outside and yelled suddenly as an explosion went off.

Moutaz called for Omar to come, but Omar, wounded, could not. Omar called some friends and the ambulance. “Ali died while hugging his father,” says Omar.

On the same day, June 23, 2012, the Israeli Air Force attacked several areas in the Gaza Strip. A first attack, at about 11:00 a.m., occurred east of Shjayah, in the center of Gaza City. The bomb did not explode.

The Israeli Air Force then attacked the area of ​Jabalia in northern Gaza. One person was killed. He was an activist with the Popular Resistance Committee. His name is Khalid al-Burei and he was 25 years old.

On Saturday morning, Israel also carried out 3 air strikes against Hamas security sites in which at least 17 people were injured.

In the afternoon, one was killed and 9 others injured in an Israeli attack on the center of Gaza City, in the Nasser arrea which is very crowded during the day. 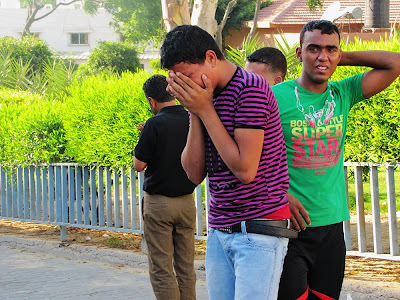 I visited Shifa hospital after the attack. The civilian who was killed is Osama Ali who was 34. He was crossing the road at the time of the attack.

In the same attack, 9 civilians were wounded. Among them:

Hassan Oda, 24, who was in front of his home at the time of the attack. 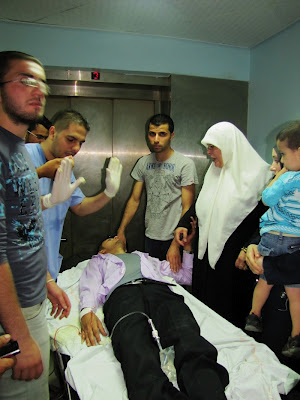 Imad Abu Nahl, 29, who was driving at the time of the attack. 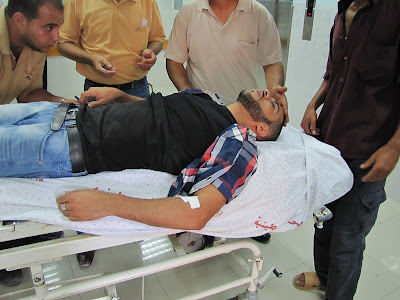 Hassan Yassin, 28, who was crossing the street at the time of the attack. 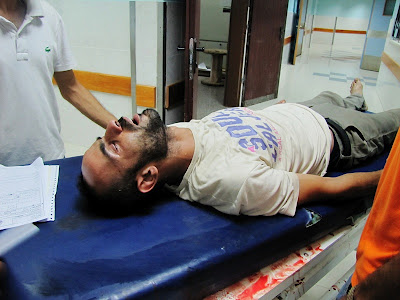 Yesterday, on Friday, June 22, a boy was killed in an Israeli attack east of Al-Bureij camp. Qassem Abdullah Ahmed was 24 years old. Two civilians were injured and were transported to the ‘Al-Aqsa Martyrs Hospital in Deir al-Balah.

On that same day, the Israeli Air Force conducted several more raids in different areas of the Gaza Strip. In the night between Friday and Saturday, Gaza City was shaken by a tremendous explosion. A Hamas military complex near Saraya, in the center of Gaza City was struck.

I visited the site during the night immediately after the attack. Many homes were damaged. Among the wounded, Hamas security members and 4 civilians.

Gaza City that night could not sleep. I lay awake in a Palestinian family’s house in the affected area. We were neighbors, telling each other about the fright. Sharing our fear brought us together in that dark night, punctuated only by the sound of sirens and lit only by the fire that remained alive after the bombing.

16 Palestinians killed and over 60 injured since Israel’s military offensive on Gaza, which began Monday, June 18, 2012.

Some people think that the situation will worsen in the coming days. The hope is that the horror of this massacre stops.