By Selina Khalil and Hakim Maghrib 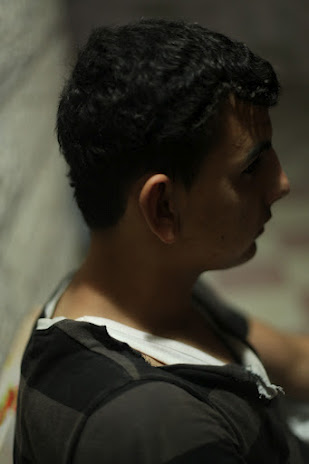 In the afternoon of July 23, more than 30 Israeli soldiers participated in a half hour training operation in Bab a-Zawiya neighborhood. The neighborhood is located in H1, the supposedly Palestinian-controlled area of Hebron.

Close to a dozen armed Israeli soldiers ran out of Checkpoint 56, advanced 300 meters up the street, and sealed off traffic. There they met with over 20 other soldiers who had taken positions on the rooftops of Palestinian residential homes.

After forcing their way in between the homes, soldiers conducted some closed activities before retreating back into the H2 area. The operation is presumably another military training drill.

Later that evening, 20 Israeli soldiers again entered the H1 area, this time in the Tel Rumeida neighborhood. Bringing with them a dog, weapons, and other military equipment, the soldiers proceeded with an hour long training operation.

Combat-like positions were assumed in different locations of the neighborhood. Some soldiers unfolded a compact ladder and climbed an earth mound, despite a parallel road. Other soldiers stopped a young Palestinian man in his car with loud shouting, forced him out at gunpoint, and searched him. A second young Palestinian man was pushed against a wall and body-searched.

When neighborhood residents left the local mosque after Isha, the evening prayer, Israeli soldiers forced them back into the mosque with aggressive shouting. Several houses were raided by soldiers, for reasons unexplained.

When International Solidarity Movement (ISM) volunteers took photos and filmed the behavior, soldiers at several occasions ran or charged against them.

“If you take pictures your camera is mine,” was one of many similar threats made by soldiers.

Another soldier said, “do not take pictures of my soldiers when we are training – I mean, when we are doing our job.” 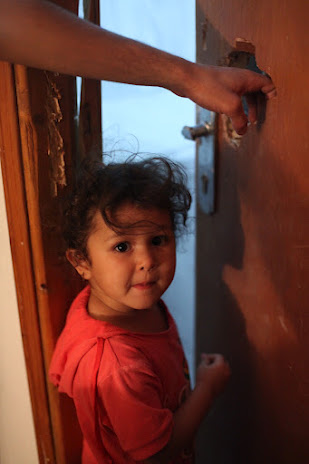 Although house owners offered to open locked doors with a key, Israeli soldiers broke their doors during a military raid- click to see more photos

In the night of July 24, ISM volunteers witnessed a second day of assault and raids in the Tel Rumeida neighborhood of Hebron. Approximately 50 armed soldiers, some wearing balaclavas and other with camouflage-painted faces, broke into and raided the home of Khalid Abu Ainsheh. Khalid’s son, Isaq Khattib, was arrested earlier at 8pm as he was about to break fast for Ramadan.

6 soldiers had come to a different home and pulled Isaq Khattib out. Isaq was searched against a wall, handcuffed, blindfolded, then taken to a military base located next to a Tel Rumeida settlement. Isaq was shortly brought back to the checkpoint located outside his parents’ home, and a knife was placed next to him.

Isaq’s mother emerged from her home, demanding Israeli soldiers allow her son who had yet to break fast, to be released.

Meanwhile, children who were playing near the scene had sound bombs thrown at them by Israeli soldiers.

Claiming that Isaq’s parents were hiding someone in their house, soldiers proceeded with raiding the home of Khalib Abu Ainsheh. Sound bombs were thrown inside the house, and men and women inside were detained separately in two rooms. Doors were broken down by soldiers, the household owners offering to open them with keys but being prevented from doing so. The outcome was 4 detained Palestinians, all of whom were later released.

In the evening of July 25, a 17 year old Palestinian boy was dropped off by an Israeli police jeep directly in front of the Israeli military-manned Checkpoint 56. The boy was shaken and visibly injured. He said he had been taken by Israeli soldiers and beaten.

The 17 year old had a swollen nose and eye after having received a beating and head-butts from soldiers, and his shirt was torn. Videos clearly capture soldiers mistreating the boy. In the videos, his face is already bleeding before he is taken away.

Palestinian neighborhoods are used as test areas for future combat situations, but also to demonstrate to the indigenous residents that Israel is in control of their lives. This escalation of harassments has arrived with the first week of Ramadan, when people are keen on spending time with their families, free from disturbance.

As Palestinians in the area and activists at the local organization Youth Against Settlements see the latest events as part of a deliberate escalation by the Israeli army, there are many reasons to keep an eye on the occupied and apartheid-stricken city of Hebron in the near future.

Selina Khalil, Hakim Maghribi, Jonas Ravn, and Markus Fitzgerald are volunteers with the International Solidarity Movement (names have been changed).