On Friday, June 22, several hundred Palestinians and solidarity activists gathered in Susya to demonstrate against the demolition orders imposed on them. Earlier this week, Israel issued orders threatening to demolish the entire the southern West Bank village of Susya. 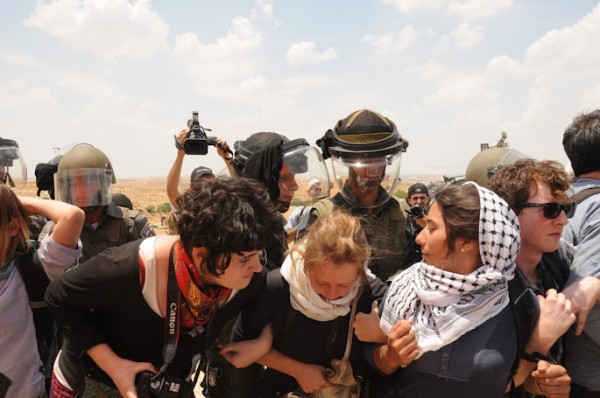 At least 5 full buses as well as private cars, taxis, and media, arrived in Susya join the demonstration on Friday morning. Among them were several different human rights and solidarity organizations. One such group included drum-players and clowns giving spontaneous performances.

Israeli army, border police, and police arrived immediately and began to fire sound bombs and tear gas canisters at the peaceful protest. Israeli military attempted to arrest a Palestinian man but he was successfully de-arrested by fellow demonstrators. When demonstrators formed a human chain, soldiers approached and were directly violent with them. The demonstration lasted some 4 hours.

Earlier this week, demolition orders were issued for over 50 structures which add to numerous demolition orders given earlier. The orders cover most of Susya, including not only dwellings but also animal pens, water cisterns, a kindergarten, a medical clinic, and the solar-powered electricity system.

Nina Larsson is a volunteer with the International Solidarity Movement (name has been changed).