Remembering Mamoun, killed by an Israeli missile as he played football

“I can never forget his image with blood all over his little body and both his legs badly injured,” Umm Mamoun Hassouna told The Electronic Intifada as she sat at a relative’s house in Gaza City. “I am a preacher [for women] at a local mosque and used to preach against harming innocent Israeli children, women or the elderly, and even cutting down a tree,” she said. 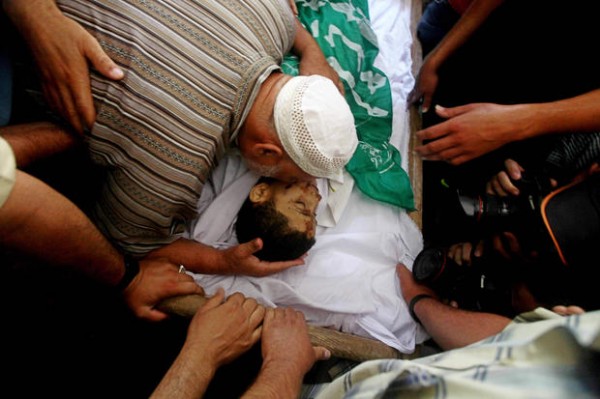 Muhammed al-Dam grieves over the body of his son, Mamoun, who was killed on Wednesday from an Israeli airstrike. (Ashraf Amra / APA images)

“After I have seen my son killed by an Israeli warplane in front of my eyes, I wonder what my only son did against Israel [for them to] kill him,” Umm Mamoun added.

Thirteen-year-old Mamoun Zuhdi al-Dam was killed on Wednesday, 20 June, during an Israeli attack on Gaza amid exchange of fire between the Israeli army and Palestinian resistance factions that left eight Palestinians dead.

At approximately 3pm, an Israeli warplane fired a missile at members of a Palestinian family who were having a picnic behind the campus of the University College of Applied Sciences in the southern Gaza City neighborhood of Tal al-Hawa. As a result, Mamoun al-Dam was killed.

His blind father, Muhammad Zuhdi al-Dam, 67, was wounded by shrapnel to the head and the neck. Three other children who were in a nearby field were also wounded, according to the weekly report from the Palestinian Centre for Human Rights.

He made tea for his parents

“One month ago, I inherited a small piece of land — about 220 square meters — from my family, and we were all so happy to own that land as my husband is an elderly retired man,” Umm Mamoun said. “Since we inherited that land, Mamoun used to go to it often to enjoy some time outdoors.”

On the day he was killed, his mother said, Mamoun went to the piece of land in the Zaytoun neighborhood, just near the Ali Bin Abi Talib mosque, at about 9am. “I received a phone call from him later on to inform me that the situation was tense and that Israeli warplanes were buzzing overhead,” she said. “His father and I were scared for him and we went to join him.”

Mamoun, his mother said, used to read the Quran, and he led noon prayers that day on the family’s plot of land. The boy also prepared some tea for his parents, and then laid down to listen to news on his mobile phone.

“As he was listening to the newscast that moment, he told us that an Israeli warplane had fired a missile somewhere else,” she added.

Killed as he played football

“Then, Mamoun went to play with a football just close to us on the same land,” his mother recalled, surrounded by mourners. “Suddenly, we heard a loud explosion and pillars of smoke covered the place. I heard Mamoun screaming and saw him stained with blood, and his legs were badly injured. By then my relatives, who are our neighbors, came over to help us as his father was slightly injured too.”

“Mamoun was everything for me — a son, a brother, a sister and everything in my life,” his grief-stricken mother said, “I am the second wife of his father, and God had given me Mamoun to fill in my life.”

In tears, Umm Mamoun spoke of how her son would tell her, “I love you so much, mom. You are my dearest, I love you, I love you.”

“He used to fill my moments with joy”

Muhammad, Mamoun’s father and a retired trader, sat at a condolence ceremony in the Asqoula neighborhood of Gaza City, with his left hand bandaged due to his injuries from the same missile strike that killed his son.

As relatives and friends came to offer condolences, al-Dam lamented, “I do not know what to say, except may God take revenge on those who killed my son Mamoun.”

Al-Dam explained that his son used to look after him due to his lack of sight. “Mamoun, may he rest in peace, used to be very reliable, though he was only a child. He used to take me to the mosque for prayer, he used to bring whatever I need from nearby grocery stores, he used to fill my moments with joy.”

No resistance, no shooting

Al-Dam told The Electronic Intifada that the moment his son Mamoun was hit by the Israeli missile, there was no sign of Palestinian shooting or rocket fire in the area.

“The area where our new piece of land is located is far away from the Israeli border line and it is populated as well,” he said.

Mamoun’s maternal aunts on his mother’s side, Umm Mahmoud and Umm Ahmad Hassouna, recalled how cheerful, humorous and polite Mamoun was.

“One day I was very sad and visited my sister Umm Mamoun to feel better. Mamoun came over to me and said, aunty, I will tell you 15 jokes so that you will smile,” Umm Ahmad said as a little smile broke the grief on her face.

Mamoun’s elder brother, Zuhdi al-Dam, 42, received condolences alongside his father. “This is something that our faith obliges us to tolerate and take for granted, but the question is, why does Israel target such little children? Why?” Zuhdi al-Dam said. “Mamoun was like my son as the age difference between us is thirty years.”

“Why do those alleged world leaders assemble at the so-called United Nations Security Council? Rather, it is the No-Security Council,” Mamoun’s father remarked.

“When an Israeli is hurt, those alleged leaders rush to condemn or call for action, while our own children are being killed and no one even moves.”

Rami Almeghari is a journalist and university lecturer based in the Gaza Strip.