New
Home / In the Media / Palestine: Finding the Will to Resist

Palestine: Finding the Will to Resist 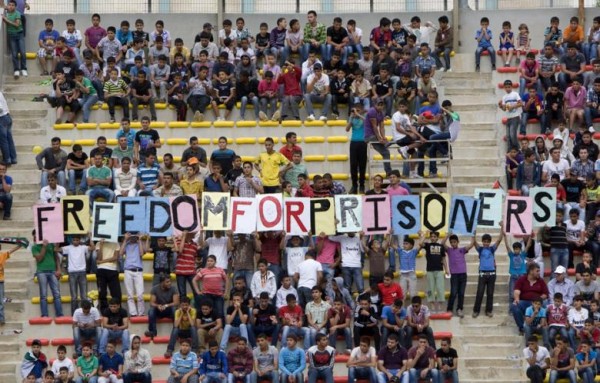 Palestinian fans hold the sign "Freedom for prisoners" during the opening match of the "Palestine Championship" between the local national team and Vietnam in the West Bank town of Al-Ram, between Ramallah and Jerusalem, on 14 May 2012 (photo: AFP - AHMAD GHARABLI)

During the latest wave of hunger strikes, many Palestinian movements emerged in support of the strikers’ struggle. It is clear that there is persistent action on the ground, but it is still limited to the active circles connected to the families of the prisoners.

At the peak of the strike, when it was crucial to have massive support, many voiced frustration with continued Palestinian apathy, especially when in Scotland and Spain, for instance, thousands marched for the prisoners. Meanwhile, in Ramallah and Nablus, only hundreds bothered to demonstrate.

Despite the long history of Palestinian resistance, current popular action remains limited to small-scale participation. One has to ask, what went wrong?

Before discussing the major factor influencing every single aspect of Palestinians’ lives – the Israeli occupation, one needs to look at the process Palestinians went through since the Oslo Accord of 1993 and the subsequent creation of the Palestinian Authority (PA) that contributed in many ways to Palestinian apathy. Although those who signed Oslo thought they were heading in a positive direction, it is clear today that what they received was a lie. In lieu of a contiguous sovereign Palestinian state, Oslo has given the PA glorified local governance over disconnected city centers. In hindsight, Oslo has been a disaster for the Palestinian cause. The agreement gave much to the Israelis – the colonizers – with minimum concessions, while giving little to the Palestinians – the colonized – while extracting maximum concessions.

One cannot examine the absence of a massive movement on the ground without also taking into consideration the context of separation and division. At present, Palestinians are a separated and divided people. Half of the Palestinian population live in the diaspora and exile, the vast majority in squalid refugee camps in neighboring countries, denied their right of return to their homes and villages. Gaza, ruled by Hamas, and the West Bank, ruled by Fatah, are separated by the occupation. Within the occupied West Bank, divisions also exist. Jerusalem is isolated from the surrounding Palestinian population due to Israeli settlement expansion and occupation. Palestinians with Israeli citizenship were also ignored by Oslo and live in continued isolation from their brethren while suffering daily discrimination in the Jewish “democracy.” Accomplishing the physical unity of Palestinians as a nation to fight apartheid is, thus, difficult. And it’s difficult not only as a result of Israeli policies, and internal division, but also due to Arab countries that host Palestinian refugees, but do not allow them to resist from their borders.

Oslo’s implications pertain not only to geography, demography and land. There were also implications for Palestinian civil society in the occupied territories. Civil society began to be transformed from being part of the liberation movement to “development.” The phenomenon of “NGOzation” has infiltrated Palestinian society. International funders too often dictate to Palestinians their agendas and priorities, killing the spirit of the freedom fighters and resistance in the process.

The Oslo agenda was designed in a way that those trapped in it would have little or no interest in challenging it. Oslo has created the illusion of a “state,” a state for people with no rights and no sovereignty over their borders, resources or fate.

Any decision to dissolve the PA or change its mandate, especially to put an end to the security coordination with Israel, should be made outside the framework of the Palestinian leaders who have vested interests and are terrified at the prospect of losing them. The sole and legitimate representative of the Palestinian people as a whole, the PLO, is the body to make such decisions. The PNC (Palestinian National Council), the legislative body of the PLO, had its last meeting in 1996, where its members were appointed, not elected as they should have been according to the PLO constitution. Since Oslo, the PLO has lost its mandate and rebellious identity to the “quasi-state” of the PA. We should not expect that the same heads of the PLO, who also run the PA, would want to voluntarily surrender their power. The PLO is occupied by the same faces who have sat there for decades, stifling all sense of change, snuffing out the resistance element of the Palestinian cause. We should not expect such an ossified institution to bring a new vision.

Apathy, therefore, became a natural result of the frustration at the unchanged leadership. This leadership lacks any strategy or comprehensive vision, except the ultimate soap opera of “negotiations.” Furthermore, the security coordination with Israel is designed to ensure Israelis’ “security” not Palestinians’. In many cases, it also impedes the people from challenging the occupation with its security forces that sometimes block protesters from reaching checkpoints and have no tolerance toward anyone who dares to criticize Abu Mazen (Mahmoud Abbas). It creates confusion; where do we start our fight? Against the PA leaders who failed the people but still hold on to power? Or the Israeli occupation forces that have trapped the PA in such a role and still control Palestinian lives? In order to fight, you need to set your target with clear eyes.

That is relevant to the West Bank under the PA and Fatah, however, Palestinians under Hamas in Gaza face similar challenges, and a regime even more oppressive toward critical voices that might challenge its rule.

Some also have concerns based on their experiences of the second intifada, where an unorganized armed resistance led to armed militias and security chaos. Many Palestinians are afraid an uprising will spiral out of control, and the same chaos will return.

Yet, the main reason for the Palestinian apathy and fatigue remains the occupation and colonization that has not relented since the creation of the PA in Oslo.

Israel attempts to crush peaceful resistance with no regard for Palestinian lives. And that, naturally, deters people from participation. When people go to participate in a protest against the occupation, they take the risk of getting shot, beaten, or arrested. Two-hundred and seventy-five Palestinian martyrs have been killed by the Israeli army since 2000 in popular resistance rallies. (Information taken from the Popular Resistance Coordination Committee).

Arrest means a verdict in a military court. Imprisonment is a near certainty and is far more of a persecution than prosecution. The system is heavily stacked against a fair day in court for Palestinians. According to Haaretz, in 2010, 99.74 percent of the trials of Palestinians in Israeli military courts ended in convictions. Arrest and then charges means a “security file” will accompany any attempt to travel, whether for leisure or studies. It kills the already near-impossible chance of getting a permit, either for work in Israel or to visit family or friends. Arrest means one becomes a target – and in many cases one’s family does as well.

Palestinians have sacrificed much for their steadfastness and resistance, with tens of thousands killed, hundreds of thousands jailed, arrested or tortured, and many others losing their homes or lands or source of income. Their sacrifice is met with non-stop Israeli colonization, their resistance is met with brutal Israeli repression, and their screams met with international silence. Combined, it has made Palestinians question the worth of their sacrifice.

Israel has “architectured” the Oslo agreement to make the occupation more efficient. To Palestinians in city centers, the occupation has become slightly less direct. There, you will hardly feel the occupation, unless you have to go through checkpoints every day or you see the Israeli army raiding your neighborhood at night to arrest your neighbor. Many people abandoned the option of filing for a permit to enter “Israel” to visit friends or family or simply Palestine. Many people gave up the idea of traveling abroad because they would need permission from Israel and they would need to cross Israeli “border” points. Most Palestinians have a “security file” in Israel and, if not them, a family member surely does. People just continue to live their lives, adapting to the reality, with the Israeli occupation sapping their will to resist. They fear losing the little they have left if they challenge the status quo.

Understanding this complexity under which Palestinians live post-Oslo explains the current situation where the will to resist has been drained from the people of resistance. In order to break down Palestinian apathy and fatigue, one will have to break down the many reasons that led to it, starting with Oslo.