By Rosa Andersson and Amina Simonsson

On Thursday, June 21, Israeli forces confiscated a water tank from a Bedouin Palestinian family in the Jordan Valley, leaving them with no access to water. Three Swedish women were arrested for standing in solidarity with Palestinian women and children who peacefully protested by standing in between the Israeli military and the water tank at risk of theft. 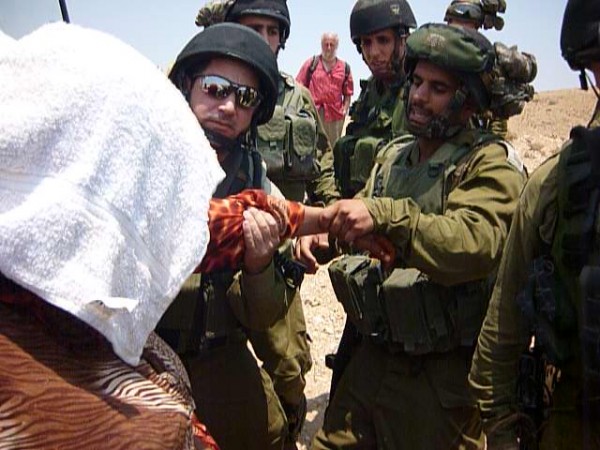 The Jordan valley is a fertile are ideal for agricultural production. When Israel took control of the West Bank, it immediately took hold of water resources and began to target Palestinian communities and empty them from the Jordan Valley. The villages left are isolated from each other not only by distance but by Israeli checkpoints, closed military zones, and other restrictions on movement. The Israeli military performs military training in proximity to many communities, putting them at constant risk.

The illegal occupation of water resources has made water access an urgent problem. The United Nations declares water a basic human right. The World Health Organization has declared that each individual need access to 100 litres of water per day,  but Palestinians use on average between 50 to 70 litres per day. Many Palestinians in the Jordan Valley however, receive as little as 10-20 litres per day. This is a figure lower than both the recommended daily intake and the absolute minimum daily consumption required to avoid ‘mass health epidemics.’ Families in the Jordan Valley are forced to buy water at incredibly inflated prices. Some households spend 40-50% of their income to buy water from Israeli companies.

“When we came to the Bedouin camp, children were crying and there were a lot of soldiers trying to drag them away from the tractor that they tried to block. There were no men, only women and children, and around 60 soldiers and policemen. The Bedouin men were scared to show any resistance because of the risk of administrative detention,” says Rosa Andersson, one of the women who was later arrested.

The Swedish women were released after 30 hours of arrest and they are now prohibited from being in the West Bank. No one, Palestinian or International, showed any violence. The Palestinian family dependent on the confiscated water tank now has no access to water as the driest season of the year has just begun.

Rosa Andersson and Amina Simonsson are volunteers with the International Solidarity Movement (names have been changed).