On Sunday, June 24 in Aqaba, Muhammed and Nassa Al-Jabba received a demolition order by Israeli authorities demanding that they evacuate the premises of their home within the next 3 days. The Al-Jabba family have not evacuated the home as it is the sole residence for their family of 10 children. The Israeli military may arrive at any time to demolish the building in the Area C (Israeli civil and security control) village. 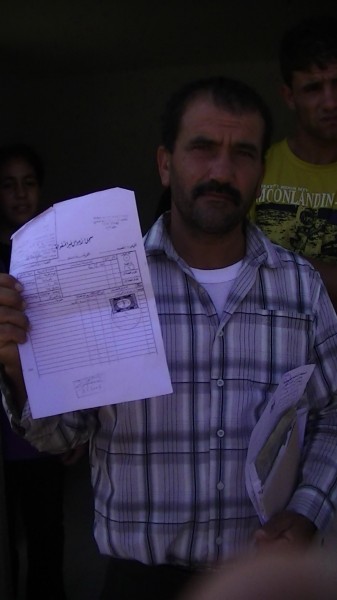 Upon arriving in the village of Aqaba, International Solidarity Movement (ISM) volunteers spoke with the mayor, Haj Sami, an older man left wheelchair bound after suffering 3 gunshots from Israeli soldiers while working on his farm in 1971. He was only 16 years old at the time and fortunate to survive.

Haj Sami introduced ISM volunteers to Nassa Al-Jabbar, the mother of 10 who has been faced with a demolition order, giving her only 3 days to abandon the premises before the Israeli army is able to arrive with bulldozers and raze her home.

Nassa and her husband Muhammed have spent 10 years building their home. When asked why it took them so long, Nassa replied that because a permit to build on their own land is impossible to attain from Israel, the house was built in 7 different stages in order to avoid the soldiers attention.

Nassa says that if Israeli forces demolish her home, she, her husband, and her 10 young sons and daughters will have no other place to go. They do not have the funds to build another home.

Muhammed states that regardless of the outcome, he will not leave his home. If demolished, their house will join the over 24,000 Palestinian homes that have been demolished since 1967.

Nassa and Muhammed’s home is not the only building that faces demolition. Four other shelters and a concrete factory have received orders as well.

The village of Aqaba has suffered extensively from the Israeli occupation. Of a population of 1000, 700 residents are internal refugees. The villagers live in constant threat of home demolition.

On September 15, 2011, two animal shelters and a home were demolished. There was no advance warning, not even a demolition order. The roads that provide easy access into the village was also destroyed by Israeli forces. On a weekly basis, Israeli forces hold military training near the village, subjecting Aqaba to the sound of gun shots. On Tuesday morning however, the Israeli military began also training with tanks. The explosions are resulting in stress and trauma for the villagers.

If allowed to happen, Nassa and Muhammed’s home will join the list of thousands of demolitions inflicted on Palestinians by the Israeli military occupation.