On Friday, May 25, illegal Israeli settlers drove into the village Lubban ash-Sharqiya where they attempted to forcefully enter a family’s home. When Israeli soldiers and policemen arrived at the scene they joined the settlers, supporting’ them whilst they tried to enter the house.

Men of the Palestinian family, together with International Solidarity Movement (ISM) volunteers and other internationals, stood at the gate of the house to prevent the settlers from entering. The father of the household, Khaled Daraghmeh, and his son were then beaten and arrested.

Lubban ash-Sharqiya is a village located some 30 kilometres south of Nablus, adjacent to Route-60, the primary north-south road that runs through the occupied West Bank. The village is surrounded from all directions by 3 illegal settlements: Eli, Shilo, and Ma’le Levona. The illegality of these Israeli colonies has been confirmed by the International Court of Justice and the United Nations Security Council.

On the outskirts of Lubban ash-Sharqiya, near the colony Ma’le Levona, Khaled Daraghmeh lives with his family. Khaled, like many other Palestinian villagers, works as a farmer and is dependent on what the harvest provides him. Living next to Israeli settlements is not an easy fate for Palestinians and Khaled has suffered a lot.

“It began to get really bad about five years ago. That was when the Israeli Occupying Forces (IOF) demolished my first house.” says Khaled.

After his first house was demolished, Khaled moved to his father’s old house just across the road. The peace he seeked there did not last long. Only a couple months later, settlers attacked and burned down the entire building. Khaled was then forced to move to a third house, an ancient Ottoman building that also belongs to his father. Here the family lived in one part of the house, using the remaining space as a poultry farm.

The settlers have made it clear, however, that they are determined to get rid of Palestinians in the area. Last Saturday, some 50 settlers forcefully entered the house, removed all the furniture, and burned it. They also poisoned the drinking water of the poultry farm, leading to the death of most of the animals inside.

Now Khaled is frightened of life in his own home. He welded the door to the living area and moved into a small, dark room, where he used to keep animals.

“In the past, I was able to repair or rebuild what the settlers destroyed, but now I have used up all my savings,” says Khaled.

The harassment continues to today. As Khaled worked his land, a settler car stopped at the road and began making phone calls. He feared a new attack and called the ISM, seeking their immediate presence. Upon their arrival, the settlers had already left and everything appeared calm. Later, while the group of Palestinians and internationals sat together having lunch, approximately 20 settlers of all ages arrived and started walking towards the Ottoman house.

Palestinians from the area, accompanied by the ISM, approached the settlers and asked them what they were doing here. They replied that the land was ‘community property’ and that they had the right to be there. Khaled, who owns the land and has all the needed documents to prove it, replied by saying that this is his land, and that he wanted them to leave.

While the discussion continued, an Israeli military jeep with 6 soldiers arrived and began to split up the crowd. A policeman told the settlers that they could not enter the house as it belongs to Khaled and his family. The settlers grew upset with the policeman and screamed that he was a coward and afraid of the internationals and their cameras.

A discussion in Hebrew took place between them and meanwhile another police car arrived and 2 other policemen joined the crowd. After a couple of minutes of heated dialogue, the 3 policemen, the 6 soldiers, and the illegal settlers walked towards the house while the settlers screamed, “you see, you see, now we can enter!” 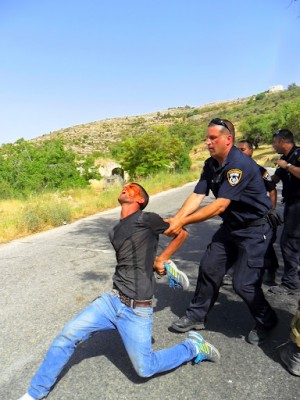 The Palestinians together with the internationals formed a line at the gate of the house to prevent the approaching group from illegally entering the house. Khaled was wrestled to the ground and beaten by soldiers and police men, even after being handcuffed. When Jamal, Khaled’s 21 year old son, saw his father beaten and attacked, he ran over to try to help. When he reached, the soldiers and policemen attacked Jamal in the same way they did his father.

Khaled’s 17 year old son, Jalad, then tried to help them and was instead attacked by the settlers and pushed away by the soldiers.

As the policemen walked away with the handcuffed men, they struck Jamal in the head a couple of times. The youngest son, Mu’min, 14, was filming the attacks on his brother and father when the policemen tried to kick him in the head. The boot missed him only by a few centimetres. Then policeman pulled the camera out of the teenager’s hands and stole it.

Only moments later, Jamal was pepper sprayed in the face before they forced him into the police vehicle. Khaled was then pushed into the jeep with bleeding hands from the brutal handcuffing.

“This has become normal to us. My father has been arrested 4 times recently and my brothers is beaten up all the time. Mu’min can not even walk to school without the settlers attacking him,” says Jalad.

To survive as a Palestinian living adjacent to these illegal settlements, can, with the assistance of the Israeli Occupation Forces, feel like a losing game. Only last year, 250 to 270 of Khaled’s olive trees were uprooted by settlers. Last week, an entire field of cucumbers was destroyed along with the irr system of the family’s land.

These attacks have pushed the Daraghmeh family into the desperate situation they are now in. After being forced to start over again and again, they have no money left. They can not repair the things that are destroyed, leading to a bad harvest, and less income.

Simultaneously, the Israeli state has offered Khaled 5 million shekels (1 million Euros) for his land. But as many other Palestinians, he is rejecting the money, and the resulting ethnic cleansing, and will continue to live and work on his land even if it means sleeping in a small, dark room with no electricity or running water.

Alex is a volunteer with the International Solidarity Movement (name has been changed).