Ten Palestinian volunteers harvested wheat in Gaza’s northern no-go zone on Wednesday, May 16, only 350 meters from where the Israeli Apartheid wall encircles the Gaza Strip. Two weeks ago the barley was cut and gathered and on Wednesday, volunteers loaded the harvest onto donkey carts to transport it for sorting, in the face of Apache helicopters, tanks, and F-16 fighter jets. 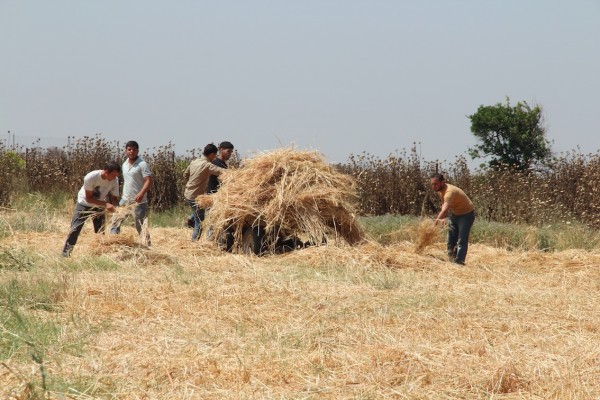 Palestinian farmers harvesting barley near the no-go zone in Gaza despite risk of Israeli army attack.

The work began at approximately 8:45am in northern Beit Hanoun, and immediately an Israeli tank became visible on a distant hill. A few minutes later, a helicopter circled above and would remain there for three hours. At 9:10, a number of jeeps patrolled the border and by 11:30, one of the Israeli outposts fired 8 shots at a point slightly further than the farmland. Over the next hour, a total of around 30 shots were fired from the same outpost.

The volunteers offered to help the owner to farm his land, due to its proximity to the Apartheid Wall. A distance of 300 meters to the border is considered the ‘no-go zone’, in which the Israeli Government prohibits farming. Even farmers outside the no-go zone, however, come under regular fire simply for their proximity to the Wall. Volunteers from the Beit Hanoun Local Initiative team farmed for six hours, joined by International Solidarity Movement volunteers.

The team of volunteers successfully finished transporting the barley despite the military presence.

Hama Waqum is a volunteer with the International Solidarity Movement.