New
Home / Gaza / Gaza: farmer shot in the leg with a targeted bullet

Gaza: farmer shot in the leg with a targeted bullet

On Sunday, May 20, an Israeli soldier shot a young Palestinian farmer while on his land in Al-Quara, north east of Khan Younis in the southern Gaza strip.

Waheed Ali Zer, 22 years old, was shot in his left leg and remains hospitalized in Khan Younis’s Nasser hospital. We went to go visit his family and Waheed’s brother Mohammed spoke to us about the events that took place on Sunday.

“After being shot, Waheed began to crawl before being picked up and taken to a first aid point. At the time, I was at university.” Mohammed is a mathematics student at Al-Aqsa University and he intends to pursue a PhD.

Waheed has three brothers and seven sisters, three of which are married. The Zer family’s land is only 500 meters from the Israeli border. Waheed’s uncle told us that the Israeli soldiers will open fire at any time.

“Here in the Kussufim area, tanks and bulldozers will often enter,” says Waheed’s uncle, “until three years ago, there were many trees, olive trees, but they have all been destroyed by the bulldozers. Also here where we are, a house has been demolished by a bulldozer. If there are no tanks and bulldozers available, the Israeli soldiers shoot from the control towers”. 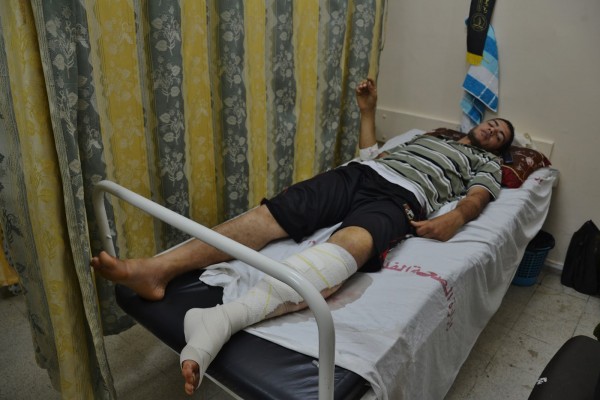 Mohammed told us that Waheed was walking his donkey when he saw a military jeep coming. Mohammed retreated back towards the tent next to his house. An Israeli soldier emerged from the jeep and shot at Mohammed from behind a small hill.

There was no warning, no bullet shots into the air. No notice, just one bullet, which was targeted directly at Waheed.

“My father carried Waheed in his arms while my mother cried,” one of Waheed’s brothers tells us.

We visited the land where Waheed was shot. On this land the family cultivates oranges, eggplants, wheat, and olives. “Our houses are very simple, we have no chance to protect ourselves,” Mohammed’s uncle told us. “The plants and the trees are scared by the Israelis, imagine us!” said Mohammed.

As I looked out across the land I noticed the proximity of military towers. One of the towers is particularly close to their land, with a machine gun visibly located on it. One of Waheed’s aunts approached us. “Our life is very difficult, for this reason the people go closer to the border to collect as much [harvest] as they can,” she says.

Waheed’s family comes from Be’er Sheva. They are refugees like many others after Israel displaced thousands of Palestinians, proclaiming their state.

We went to Nasser hospital in Khan Younis to meet Waheed. His left leg was wrapped in a bandage stained with blood and his bed sheet was also tainted with blood and liquid. He had an expression of suffering on his face after having been operated on while under general anaesthesia. The bullet aimed at him perforated an artery and a nerve.

“I had bought a donkey,” Waheed began to tell us, “and I was taking it towards my land when I saw an [Israeli] jeep coming. A soldier came out of the jeep and shot me. I fell to the ground feeling my head spinning. The bullet entered from one side [of my leg] and exited from the other side. I crawled and my father called an ambulance which took a long time to arrive.”

I asked him if he wants to send a message to the international community and he replied, “I ask for their solidarity with the Palestinian people. I ask them to stop the Israeli attacks.”

During our visit to the hospital other relatives and friends of Waheed arrived. One brought him some food. Waheed smiles to his visitors but his eyes cannot hide his grief. A cotton curtain separates him from the other beds of the crowded hospital.

A nurse arrived to tell us that we should go because the visiting time is over. I left Waheed with the promise of going back to his home for another visit. We will return to their area as an international presence while the international community continues to stay silent in the face of ongoing crimes against the civilians of the Gaza Strip.