By Richard Frank and Dan Stingy

18 year old Saleh al-Zoghayer, who was recently stabbed by Israeli soldiers in Bethlehem, has been at the centre of the media recently. Several contradicting and false reports surfaced along with a shocking photograph of Saleh following the stabbing. 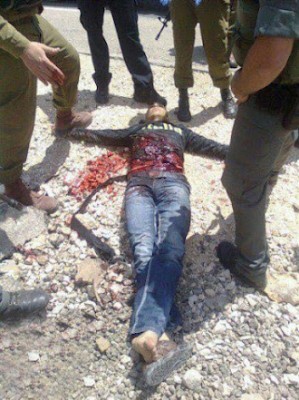 The photograph which circled social media shows 18 year old Saleh al-Zoghayer following his stabbing with soldiers stepping on his hands.

On Sunday, May 20, Saleh took a day off. Leaving his construction job in the town of Tobas, he travelled to Bethlehem to visit doctors there due to an illness. Upon arriving in Bethlehem, it is uncertain as to why, he was instructed by Israeli soldiers to exit the vehicle in which he was a passenger. Saleh found himself in the midst of a bike tour held by illegal Israeli settlers. The tour in question was held for Jerusalem day and was heavily guarded by Israeli Occupation Forces (IOF).

According to Israeli media sources such as Ynet and Hareetz, Saleh attempted to stab an IOF soldier and instead harmed himself. At first, both Palestinian and Israeli news sources suggested that Saleh had died from his injuries but this was not the case.

Saleh’s father, Nidal Mohamad al-Zoghayer, was interviewed by International Solidarity Movement (ISM) volunteers on May 23 and an entirely different story emerged. Nidal says his son is not the “Palestinian terrorist” that Itamar Fleishman of Ynet baselessly suggests. Saleh was on the receiving end of criminal violence, said Nidal, and not from IOF soldiers but from the illegal settlers.

Having been denied permission from Israeli authorities to go visit his son, Nidal relays to ISM what his lawyer said after seeing Saleh with his own eyes.

According to Nidal’s lawyer, Saleh is recovering and in stable condition. He suffered multiple stab wounds, with two perpendicular wounds across his abdomen and one near to his heart. Barely able to sit up in his hospital bed, his legs are tied together at the ankles with cuffs. Three IOF soldiers are positioned at his door at all times. 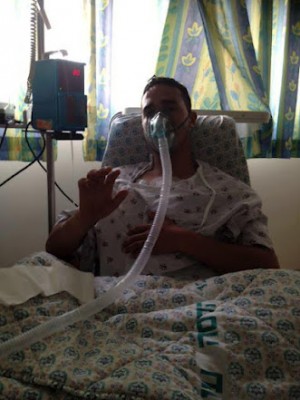 Saleh al-Zoghayer is currently chained to a hospital bed recovering from his wounds.

Nidal tells us the IOF are detaining his son and upon his recovery, Saleh will be charged with ‘assaulting a soldier.’ He finds the IOF’s version of events highly unlikely. If Saleh had indeed attacked a soldier in an area with a large military presence, says Nidal, he would have immediately been shot.

Saleh is not a political activist, said Nidal. “My son has no political affiliation, and has never been detained before this incident. He works 6 days a week, Saturday to Thursday, only to come to Hebron on Friday evening to spend time with his family and friends.”

Illegal settlers are known for their violent behaviour against Palestinian men and women of all ages. Just one day prior to Saleh’s stabbing, settlers attacked the town of Asira Al-Qibliya, shooting live ammunition and injuring several including one man who was shot in the head. Israeli soldiers were present but did not interfere with the settlers’ attack as has become routine in the occupied West Bank.

Nidal showed photographs of wounds to Saleh’s neck that indicate a struggle as well as further photographs of his son covered in blood, with IOF soldiers standing on his hands.

Nidal says that if the IOF is able to stand by as illegal settlers fire live ammunition at unarmed villagers, then it should not be controversial for him to suggest they stood by and allowed an attack on his son. “There are many cameras in that area and soldiers are on hand 24 hours a day. I want to see the Closed Circuit Television (CCTV) footage of what really happened to my son.”

Saleh was in the midst of saving money for his wedding and the purchase of a home. He is one of 8 children, the eldest of which is currently held in an Israeli prison. Originally having been detained by the Palestinian Authority for his political views, Saleh’s eldest brother was re-incarcerated by the IOF upon his release, without a chance to see his family in between.

Saleh’s uncle, Ahmed al-Zoghayer, also sat down with the ISM. He reenforced Nidal’s belief that if his nephew had attempted to attack a soldier he would have been shot.

Ahmed clarified one of the reasons for Saleh’s presumed death. The ambulance carrying Saleh was late to arrive at the scene. When it arrived, his heart had stopped and he was believed to be dead. Defibrillators were used and his heart began beating again. Saleh was then successfully operated on.

An 18 year old has been accused of attacking an IOF soldier. His family contests this and their demand for CCTV footage has not yet been responded to. ISM supports the call for its obtainment.

Richard Frank and Dan Stingy are volunteers with the International Solidarity Movement (names have been changed).