Israel is paranoid about pro-Palestinian activists 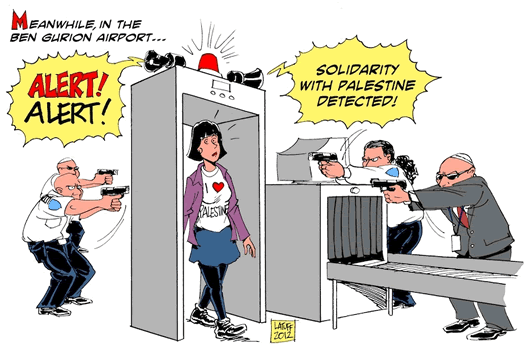 Israel will not stand idly by as thousands of activists prepare to arrive on Sunday; it will not miss an opportunity to look ridiculous in the eyes of the world.

And with what shall we frighten the Israeli public in advance of the seventh day of Passover? How will we provide the dose of fear to which it has long since become addicted? After a week of a quiet and safe vacation, we have to find something, after all. The Iranian threat has entered a negotiations freeze, terror is quiet, even the Grad missiles have diminished in number, there is no mass plague on the horizon and even the circumstances of the attack against the Jew in Kiev have not become sufficiently clear.

But Israel has not been abandoned, and the Israeli mind finally hit on something: the pro-Palestinian fly-in “provocation,” as it has already been called. The minister of public security is convening feverish consultations, the airlines have received the “blacklist” prepared in advance by the omniscient security networks, the crime reporter – of course this is about crime, what else? – has already been sent to Ben-Gurion International Airport to greet the looming danger.

Israel is prepared for D-Day this coming Sunday. They say 2,500 activists will land in Israel and sow great fear. Although the crime reporter explained to the nation that the activists do not plan to bear arms or resort to violence, still, when it comes to danger, to terror, to scare-mongering, the forces are already prepared for the big day. The last time, about a year ago, it ended with 127 detainees who were immediately expelled, as they deserved, and the danger was nipped in the bud.

The intentions of the organizers – a visit to demonstrate solidarity with the Palestinian people, a trip directly from Ben-Gurion to Bethlehem without any violent intent – were immediately blurred and replaced with the usual Israeli accusation: terror and delegitimization. As we accuse any peace lover or human rights activist.

Had Israel not inflated the story to such terrifying dimensions, few people would have paid attention to this innocent protest. Had Israel also welcomed them warmly and sent them on their way to Bethlehem, that would have embarrassed them and even undermined their objective. But the State of Israel will not stand by idly. It certainly won’t miss an opportunity to look ridiculous and even more contemptible in the eyes of the world. It will immediately turn them into personae non grata, as it did to Gunter Grass, as well as an airborne threat.

Entry into Israel is permitted only to its declared friends. Not a Spanish clown and not a German writer, certainly not human rights activists. An ignorant, extremist, Christian American right-winger is welcome; an intellectual, conscientious European left-winger is sent to the expulsion cell. Israel 2012.

In the case of flotillas as well as fly-ins, these are activists, most of whom mean well. The Swedish writer Henning Mankell turned to us before the most recent flotilla to Gaza: “For once report the truth. Don’t you see that there is no declaration of war here, but a declaration of peace?” And of course his words fell on deaf ears. Mankell participated in two flotillas to Gaza, was expelled twice from Israel in disgrace, and published his harsh impressions in the world’s leading newspapers.

Had Israel not confiscated his computer and his property and treated him like a terrorist, his impressions would have been different. Had Israel invited him to present its viewpoint, perhaps his criticism would have been less harsh. Mankell and his friends will not give up. Now another flotilla is being organized in Sweden, this time on a sailboat carrying flowers, which we will probably also treat as though it were an aircraft carrier about to attack Israel.

The roots of this paranoia are deep and thought-provoking. Were Israel convinced of the justice of its path, it wouldn’t behave this way. If Israel really thought the occupation is just and legal, it wouldn’t be frightened by every conscientious activist who opposes it. If it had nothing to hide, it would respectfully invite them to visit.

But when the ground is burning beneath our feet, and the fire of doubt and insecurity is consuming everything, the only response is a violent and unrestrained attack. On Sunday, when the farce of arrests and the grotesque expulsion take place once again, the activists will register another significant victory: Once again they will prove that Israel does have something to hide, that in spite of all its propaganda, Israel is well aware that there are skeletons in its closet and anyone who dares come near them will suffer the same fate – expulsion.

For more on the Welcome to Palestine 2012 campaign click here.

Press Release from the Welcome to Palestine Campaign