The seen and unseen in the No Go Zone

Today, like ever Tuesday, we marched into the no go zone north of Beit Hanoun.  We gathered by the half destroyed Beit Hanoun Agricultural College and marched north, towards Jerusalem.  A Jerusalem that few of the protesters have ever seen, they have never been allowed to go to Jerusalem, it is forbidden to them, just as the land in the no go zone is forbidden to them.  Jerusalem and Al Aqsa are unseen.  We demonstrated for Al Aqsa and the prisoners.  The prisoners too are unseen; Gazans are not allowed to visit their sons and brothers and held in the prisons of the occupation.  As we walked down the road toward the no go zone a giant balloon rose over the wall.  We are the seen, watched from giant balloons, watched from soldiers in the towers that line the wall, seen from the sights of guns, an Apache helicopter roars in the distance.  Local herders tell us that there are tanks behind the wall.  For us, the soldiers who look at us through rifle scopes are yet unseen.  Later, they will make their appearance.  In the sky floats the black flag which flies over the occupation, most of the world refuses to see it, they refuse to recognize it for what it is, but for the people of Palestine it always floats in the sky, like the second moon in a Murakami novel.

We enter the no go zone and walk toward the flags that we have left during previous demonstrations.  There are about forty of us, we have no guns, only our voices and our flags.  We stop by row of flags we left last week.  Sabur Zaaneen from the Local Initiative of Beit Hanoun starts to speak, “Khader Adnan told us that honor is more important than food, Hana Shalabi reminds us that freedom is more important than food, we will continue the struggle.”  Both of them are held in Israeli prisons, neither of them have been charges with any crime.  Three months ago few people knew who either of them were, they were unseen, but they still existed, within them both was a great power and a great determination.  Both of them refuse to be oppressed in silence, their hunger strikes are calls for justice, for honor.  They are inspirations to us all. 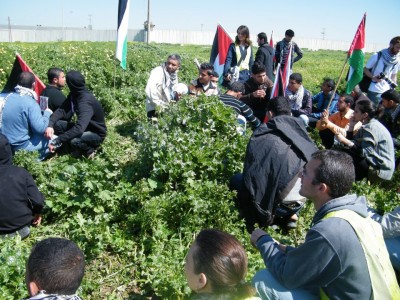 We sit down under the flags.  Our goal is to spend twenty minutes in the no go zone.  After only a couple of minutes the unseen Israeli soldiers start to shoot at us.  Bullets whistle over our heads, thirty maybe forty of them.  We stand up, retreat down a small hill and stop.  The young men begin to chant, against the occupation, pledging their lives to defend Al Aqsa, an Al Aqsa that few of them have ever seen, in support of Hana Shalabi, a woman none of us has ever seen.  It doesn’t matter that most of them have never seen Al Aqsa, or Jenin, or  Hebron, or Jaffa, that they have never seen the homes from which their grandfathers were driven, the orange trees that fed their grandmothers, those things are still theirs, they are still inside of them.  Theft does not change possession.

We leave the no go zone when we want, we are not driven out by the Israeli bullets which whistle over our heads.  As we leave the no go zone the soldiers come out of hiding and watch us from atop their tower, we see them with our bare eyes, they see us through rifle sights. We have done what we set out to do today, we have tried in our small way to remind people that closing your eyes and saying that you don’t see something does not make it disappear.  What is unseen is often more important than what is seen.  Food we can all see, honor, none of us can see, but honor is more important than food.  Al Aqsa is something that many of the people here have never seen, but it is something for which we are willing to give our lives.  Justice cannot be seen, but all of us are willing to fight for it.  The struggle will go on, a struggle mostly for unseen things, often unseeable things.  It is a struggle for the only things really worth fighting for, justice, freedom, and peace.  I have never seen Khader Adnan or Hana Shalabi but I would like to thank them both, for showing us what heroism looks like.  Even those that have never seen Al Aqsa know that it is beautiful, that it is worth dying for.