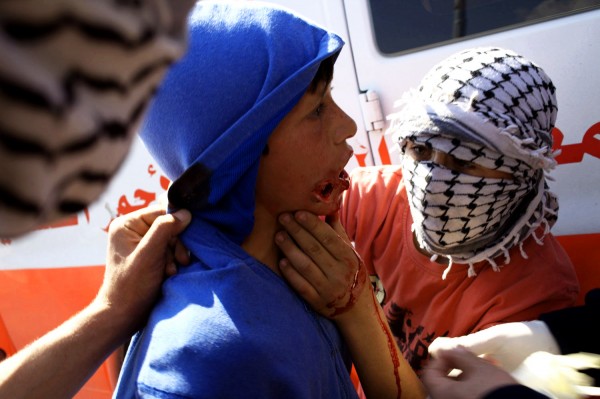 15 year-old Ez Tamimi minutes after being shot in the face. Picture credit: ActiveStills

The bullet shot from a short distance hit the boy in the face penetrating his right cheek and piercing it.

Israeli Border Police officers shot a rubber-coated bullet at 15 year-old Ezz Tamimi’s face from a distance of about 20 meters, during the weekly demonstration in the West Bank village of Nabi Saleh today. The bullet, which hit the boy’s cheek, went through it, gouging a large hole in it. The Israeli army’s own open-fire regulations forbid the use of rubber-coated bullets against minors.

The incident took place at the center of the village ,hundreds of meters away from where a demonstration was taking place, when Border Police officers invaded the village.

For the first time in months, protesters managed to reach the vicinity of the contested water spring, which sparked village demonstrations over two years ago when taken over by settlers. The protesters, mainly women from the village, managed to confound the soldiers by advancing towards the spring from an unexpected direction. The protesters who were held back by the soldiers meters away from the fountain proceeded to block the road leading to the adjacent Jewish-only settlement of Halamish for some 20 minutes.

The previous night, the Israeli army staged another nighttime raid on the village, an what has become an almost nightly practice in the past three weeks.