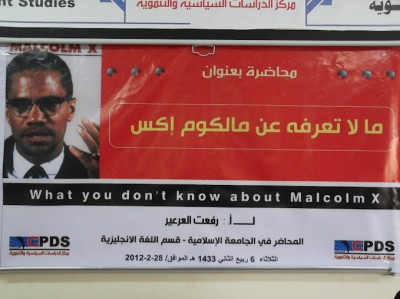 At the end of the United States’ Black History Month, one week after the 47th anniversary of Malcolm X’s assassination in New York’s Audubon Ballroom, and another week shy of my first year in Gaza, I attended a talk on X at Gaza’s Centre for Political and Development Studies (CPDS) Tuesday.

My friend Yousef Aljamal, a translator at CPDS, coordinated the event. “We are being subjugated to occupation and racism,” he told me when I asked him why. “I see Malcolm X as a role model. He fought against racism, just as Palestinians are doing today.”

CPDS’s lecture hall held a larger crowd than it has during any other event I have attended there. The speaker, Refaat R. Alareer, is a popular teacher of English at the Islamic University of Gaza (IUG). Joining CPDS regulars, dozens of his students had turned out for another opportunity to hear him.

“I don’t claim to be a Malcolm X specialist,” Alareer said. “I’m only a fan.” His interest in X, he said, began twelve years ago. “I was teaching a course, and there was an amazing passage about this man, of whom I had never heard before. The passage was so eloquent, so articulate, so amazing that it pulled me into this personality, this area of knowledge that I, again, never knew before.”

Alareer quickly ordered and read The Autobiography of Malcolm X. “Malcolm X has had, since then, an amazing influence on my life, to the extent that I now name him as my number one role model,” he said.

Alareer’s talk covered the phases and transitions of X’s varied life, with a focus on two main themes: the influence of his childhood, and misconceptions that often cloud modern understandings of him. “If you ask anyone about Malcolm X, he will quote him about violence, and how violence is the most important means to regain and restore rights, dignity, freedom, equality – so many things.” 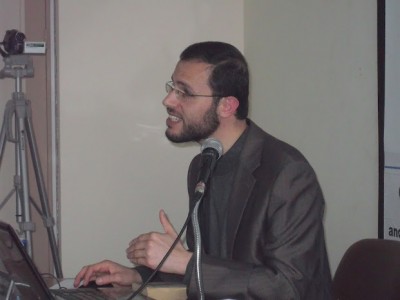 “By doing this, we are actually not doing justice to this great, amazing man,” Alareer added. “We are zooming in on only one part of his life.”

Alareer quickly sketched key points of X’s Black nationalist upbringing and the racism he and his family faced: the arson of their house as police and firefighters stood by, the former later questioning his father about his permit for the pistol with which he defended his family; the murder of his father; the liquidation of his family by county social workers; his mother’s nervous breakdown; and discouragement by his teachers. “He turned this curse into a bliss,” Alareer said. “This harsh life did not push him, for example, to suicide – to kill himself – or to become a serial killer.” Instead, X’s painful experiences pushed him to establish himself as one of 20th-century America’s foremost leaders.

Alareer also described an aspect of X’s life as the middle of seven children that, he said, explains “how, he, in part, came to be the Malcolm X we know. How he learned that sometimes, you have to make noise. Sometimes, you have to use violence. Sometimes, instead of being gentle, you have to be tough, like Hamlet’s motto of ‘be[ing] cruel to be kind.’” When his exasperated mother asked why X would “cry out and make a fuss until [he] got what [he] wanted,” unlike his eldest brother Wilfred (who later introduced him to the Nation of Islam), X “would think to [him]self that Wilfred,  for being so nice and quiet, often stayed hungry … So early in life, [he] had learned that if you wanted something, you had to make some noise.”

As a young gangster, Alareer  said, “[X] was nicknamed Satan for his profanity, for his atheism. He hated everything and everybody: gods, laws, etc.” And while the Nation of Islam (NOI) offered him a system of personal discipline and a means of organized struggle, its theology, in Alareer’s eyes, left something to be desired. “Unfortunately, Elijah Muhammed had a special version of Islam, which by no means stands for Islam, or what Islam means,” he said. “Elijah Muhammed claimed, at the end of his life, that he was a prophet of Islam. He claimed that all Muslims are Black, that Islam is the religion of Black people, and that God is black; that the white people are devils; and that they were created, not by God, the Black guy, but by some other guy by the name of Jacob.”

“These ideas are absurd, huh?” he asked. His audience, of which I may have been the only non-Muslim member, murmured its agreement. “What – what the hell?”

But X, Alareer  said, “believed in this under the circumstances. It is stupid to think what Elijah Muhammed was preaching, but probably, if you were squeezed into the corner where Malcolm X was, I think you would do the same.”

X’s background in the NOI, Alareer said, prepared him for his 1964 hajj to Mecca and practice of Sunni Islam as El-Hajj Malik El-Shabazz . “As a criminal, as a prisoner, as a ‘Muslim’ who was not a real Muslim, as a Muslim who was a real Muslim, as a man of peace, as a man of violence, he was a man of all trades, in a sense. As a member of the Nation of Islam, he said that whites are the devil, but as a Sunni Muslim, he embraced all people as brothers.”

X’s famous statements on violence, Alareer said, were also circumstantial. “I think that Malcolm X was complementing the role [of Martin Luther King Jr.] at a time when everybody was calling for nonviolent, peaceful means to find a solution to the Black problem.”

“All Palestinians admire him, or should admire him, for many reasons,” Alareer concluded. “He wasn’t ashamed to change when he discovered there was another way he could follow and adopt, another means to improve his status and change his horrible life. As Palestinians, we can use different means and methods to liberate ourselves, to get rid of the occupation and the evils of the occupation, ‘by any means necessary,’ like he said. ” This portion of Alareer’s talk, beginning at 41:25 of the audio file and focusing on X’s implications for Palestinians and their struggle, really deserves to be heard by everyone, even those without the time to listen to the rest.

Afterward, I spoke with Jehan Alfarra, a 21-year old English literature student at IUG. “Malcolm X is a good character to identify with,” she told me. “He was a product of his environment. You can see how his childhood and life influenced his approach to the challenges he faced. In that, he’s like many of the Palestinians here. And I love the transitions in his life. I love his bravery. He was brave enough to admit how he felt, and to admit it when he had met more people, knew more about the world, and changed his mind. Palestinians in Gaza are under a mental siege, as well as a physical siege. Malcolm X shows how to overcome that.”