Demolitions: Israel’s path of destruction through the Jordan Valley

Families and their livestock are left without shelter as Israeli Occupation Forces soldiers and bulldozers leave a path of destruction El Hemmi, al-Farisiya and Khirbet Homse in the Jordan Valley

On the 26th of March several houses and animal barricades were demolished in the small communities of El Hemmi, Al Farisiya and Khirbet Homse in the Jordan Valley.  The convoy of military vehicles started out in El Hemmi in the morning and  continued to Al Farisiya and ended in Homse close to Hamra Checkpoint by the afternoon.

Early in the morning Mahmoud Awad from the small community of Khirbet Tel El Hemmi, north of the Jordan Valley, went to graze his sheep in the mountains surrounding his home.  He did not make it far before hearing his wife screaming as four military jeeps, two civil administration cars, 15 soldiers, and two bulldozers arrived and surrounded their house.

The IOF had come to destroy Mahmoud Awards’ property for the second time.  Within a few minutes the house that was home for six members of Mahmoud’s family was destroyed.  The family was given no time to pack up their possessions, which now are spread all over the ground, beneath and inbetween the demolished bricks.  When asked where the family will go and how life can continue, Hani Mahmoud, the father of Mahmoud Awad, replied that they “must ask for mercy from Allah and hope for better times.”

So far the family has been offered shelter in the neighboring house.  If the family chooses to rebuild their home – they will have to live with the constant threat of yet another demolition.

Around 9’clock the military jeeps and bulldozers continued up the small road of el Hemmi to reach the houses of Abed Rabu and his family. Two houses and four animal shelters were demolished – leaving no shelter for the eleven members of his family including a baby aged two months. Under the bricks that used to make up their home shoes and clothes were seen, as the family was given no time to collect valuable possessions before the bulldozers started their destruction.

Abed Rabu received a demolition order in November demanding him to destroy his own house and the shelters for his animals. He hired a lawyer, and he was at the moment trying to take his case through the court system. When we left Abed Rabu’s neighbors and friends had arrived and were building a new tent for the family to seek rest for the night.

At around 11’clock the military cheeps and bulldozer reached Al Farisiya close to El Hammi. For Ali Zhurida Abdallah and his family this was the third time this year that Israeli military has entered his land and demolished his animal shelters.  Ali is a shepherd and he has been living on the land for more than 50 years. Several times the Israeli soldiers have told him to pack up his things and move to Tubas. When refusing to leave his land, soldiers have threatened him that they will come back in the night to kill him.

Ali’s brother Hussein lives 50 meters away and also had animal shelters destroyed this morning, leaving 175 sheep without shelter and protection for the night. Hussein will have to stay up all night and look after the animals making sure that no wild animals will attack the sheep. Looking at the destruction carried out today Hussein’s wife says, “They want to be the masters of everything. Look, they destroy even animal shelters. The Ottomans, the British and the Jordanian have all occupied this land- but not one of them treated us in this way.” 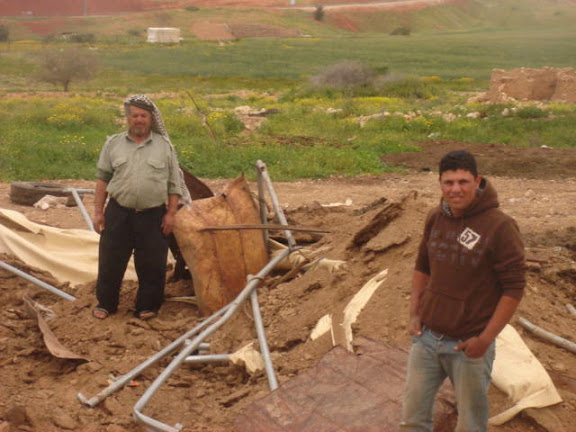 A path of Zionist destruction – Click here for more images

At around 12:30 PM the convoy of destruction arrived in Khirbet Homse close to Hamra Checkpoint.  Suleiman Abdallah Mahmoud Bsharat watched as the bulldozers destroyed his two animal barracks that until  a few days ago gave shelter for his 300 sheep.  According to Suleiman the military was trying to demolish the barracks whilst the animals were still inside.

Suleiman and his family had to move fast in order to rescue the sheep from the moving bulldozers.  Three months ago on the 14th of January Suleiman had his animal shelters demolished for the first time. He chose to rebuild.  He had not received any demolition order on his newly built barracks before the demolition.

Monday’s events are the latest in a series of home demolitions in the Jordan Valley.  The Valley is 94 % area C which makes almost every community and village very vulnerable to the process of ethnic cleansing. The house demolitions are well documented by the Jordan Valley Solidarity Group and  the Israeli Committee Against House Demolitions.

Andreas is a volunteer with International Solidarity Movement (name has been changed).