On March 9 2012, 6 volunteers of International Solidarity Movement were walking down Shuhada Street near Checkpoint 55 at approximately 11 AM, when drunk settlers attacked the group and injured one international volunteer. 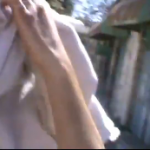 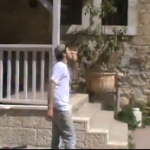 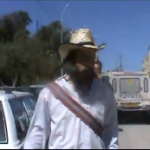 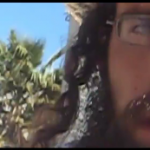 About 5 drunk male settlers began to scream at and surround the internationals, yelling “keffiyah,” the traditional Palestinian scarf, that two internationals were wearing.  Settlers were visibly carrying bottles of alcohol.

The drunk settlers shoved one woman from the back and then threw wine on her.

At the point the group began filming the settlers continued to hit, shove and try to grab the cameras of all 6 people.  A police car drove by and did not stop the attack.  One settler, wearing a dinosaur tail costume on his back put a towel on his face before trying to grab the camera of a Canadian ISM volunteer and then punched a British ISM woman in the face. They then fled shouting.

The British woman fell to the ground and dropped her camera, and another settler picked it up.  The ISM volunteers walked up to 5 or 6 Israeli soldiers sitting about 50 yards ahead and told them what happened.

They laughed and said the internationals had brought it upon themselves by wearing keffiyehs.  The internationals then walked to a police car parked at the next junction. While they were explaining what happened, settler Anat Cohen came up to the internationals and police screaming in Hebrew, and then slapped a Canadian ISM woman on the arm, in front of the police.  The police then sent this woman to retrieve the camera.

They told the internationals that this woman was the “head of the settlers” and that they had a “special relationship with her.” “We do her favours and she does us favours,” they said.

The camera was not returned so the internationals attempted to file a complaint at the Israeli police station near the mosque, but were told to go to the  Kiryat Arba police station.  When the British woman asked for a police escort they said to take the bus (motioning to the settler bus station).

A police report was filed at Kiryat Arba but was only in Hebrew so the Candian ISM woman and the British woman refused to sign these statements.  The police have instructed them to bring in the film footage after Shabbat.

The attack comes following weeks of warning and aggression towards photojournalists and activists with cameras by Israeli military and police, which have stated to internationals that Israeli law forbids the photography of their operations, or rather, their breach of international law and human rights.

Activists have received these warnings for weeks now, and today’s attack comes parallel to the deliberate targeting by Israeli military of journalists and activists with cameras, by shooting tear gas canisters and bullets directly at them at most West Bank demonstrations.

About a month ago, Reporters without Borders published this statement regarding these warnings and threats.

While this attack is an escalation against internationals in the region, and while it is evident that the Israeli military and illegal settlers are collaborating in attacking Palestinians and internationals,  International Solidarity Movement will not desist from bringing proof of Israeli aggression through pictures, videos, and its continued reporting.