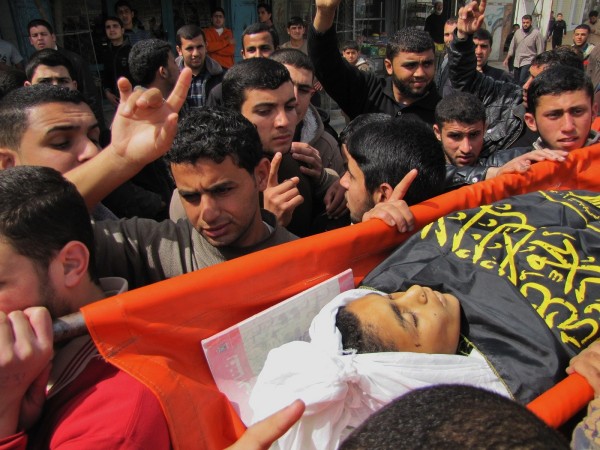 Ayoub, martyred in an air strike

Twelve year old Ayoub Assalya was murdered today. He was walking to school when an Israeli missile landed next to him.  It was seven A.M.  He is another casualty of Israel’s latest attack on Gaza. For three days now Gaza has been under bombardment.  Eighteen people have been killed.  Dozens have been injured.

His funeral was held today in Jabalia, the refugee camp where he lived.  We waited outside the mosque for midday prayers to end.  The street outside was crowded with people waiting for the funeral.  A bus was parked to carry those who could not walk the several kilometers to the cemetery.  Ayoub was carried out on a stretcher, a stretcher held by a dozen men, his bloodied face the only thing visible, his body was wrapped in white cloth.  His face appeared swollen.

The mourners carried his body east to the cemetery.  A sound truck drove along with them.  The crowd chanted, “God is great”, “there is no god but god”, and “the martyr is the beloved of God”.  Music played and the black flags of Islamic Jihad floated above us.  The men walked quickly, down the dusty road out of the camp and towards the cemetery.  The day was hot; dust rose under the hundreds of pairs of feet that walked with Ayoub, people used Kleenexes to cover their mouths. 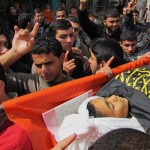 Ayoub, martyred in an air strike 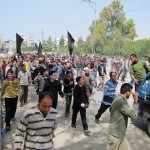 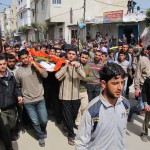 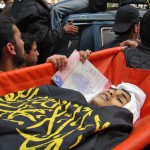 As we approached the cemetery you could see the border.  This is the same border where the Israel shot four men yesterday. The four men had been attending the funeral of yesterday’s martyrs.  The land leading up the border is barren, there are no trees, Israel bulldozed them all years ago. A giant Israeli gun tower looms on the horizon. These towers dot the border of Gaza, reminding everyone that Gaza is a prison.  In the cemetery though, there are trees, trees growing amidst the graves.  Perhaps the graves saved them from the Israeli bulldozers.  The cemetery is beautiful, white graves under palm trees. Fruit trees also grow here.

As we enter the cemetery we see that there is another funeral already going on.  A few hundred people gathered only a hundred meters away from us, burying yet another martyr.  Ayoub is buried in a freshly dug grave.  His grave is next to six other fresh graves, graves from martyrs of yesterday.  They do not yet have gravestones, their names are written on cardboard attached to concrete blocks.  They lower Ayoub into his grave and the men start to fill it with earth.

After the grave is full and a slight mound has formed over Ayoub’s small body one man keeps shoveling earth onto it, others tell him, “khalas”, enough, he doesn’t stop.  The man shoveling dirt ignores them, he continues to shovel, finally, someone puts his hand on his arm and leads him away.  He is led away, it is final, Ayoub is dead, the funeral is over.  The mourning will continue for many years.

Nathan Stuckey is a volunteer with International Solidarity Movement