Beit Hanoun: Celebrating the land and culture of Palestine 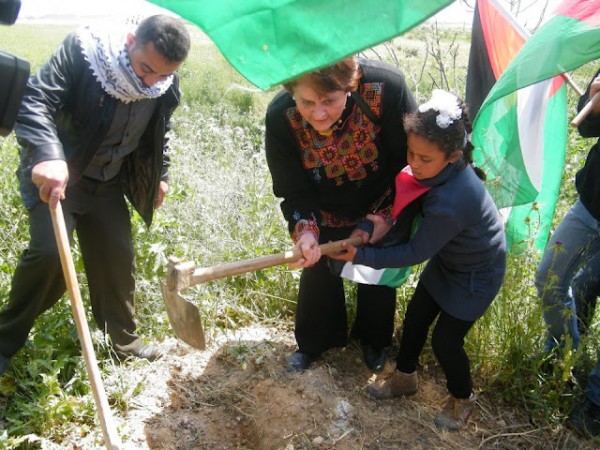 Today, Beit Hanoun celebrated Land Day.  It is true that Land Day isn’t really until tomorrow, but tomorrow is the Global March to Jerusalem, tomorrow, God willing, Land Day can be celebrated on the land from which the refugees were expelled 64 years ago.  Today, Land Day was celebrated on the land that Palestinians have managed to hold onto in Palestine.  Land Day commemorates the protests against the expropriation of Palestinian land which rocked Palestine in 1976.  Six people were killed, over a hundred injured and hundreds more arrested.  In Beit Hanoun we marched under the slogan, “A united land and a united people.”

About 50 people gathered in Beit Hanoun to commemorate Land Day with us.  People from the Beit Hanoun Local Initiative, the International Solidarity Movement, other foreign activists and people from all over Gaza marched with us.  We marched north out of Beit Hanoun toward the no go zone.  We were going to plant olive trees, bake bread, and dance debka.  The women wore traditional Palestinian dresses; some of the men wore traditional clothing as well.  We carried flags, posters, hoes, water and olive trees, these were our weapons today.  We didn’t actually enter the no go zone, we were working on land near the Palestinian police post near Erez crossing.  When we arrived people immediately set to work, planting olive trees, setting up a tent, preparing ovens to bake bread on.  The mood was festive, people sang in circles, children threw rocks into the water of a nearby ditch; bread was eaten the moment it was taken off of the oven.  While all of this was going on others worked the land, they planted olive trees and cleared weeds away from olive trees already growing on the land.  When we finished planting the trees young men gathered to dance debka and sing.

One of the organizers received a phone call.  Apparently the Israeli’s had called the Palestinian police in the nearby police station, they were threatening to shoot us if we did not leave the land.  They didn’t claim that we were in the no go zone, such a claim isn’t necessary in the eyes of Israel, shooting Palestinians doesn’t really need an excuse.  We had no weapons, there were women and children with us, yet soldiers 500 meters away in concrete towers embedded in a giant concrete wall were threatening to shoot us.  It wouldn’t be either the first time the Israeli’s have shot at us, nor the first time they Palestinians simply for being in the range of their guns.  Many people have been shot on their land in the north of Beit Hanoun.  Israeli threats did not force us to leave the area, as one of the young men said, “This is our land, let them shoot if they want to, this is our land and it is our right to be here.”  We left when we were finished singing and dancing.  On the way back to Beit Hanoun we shared juice and cookies, the rewards of a day of being on the land.