New
Home / Nablus / A family’s nightmare: Beaten and kidnapped by illegal settlers near Qadumim as Israeli military facilitates the crime

A family’s nightmare: Beaten and kidnapped by illegal settlers near Qadumim as Israeli military facilitates the crime 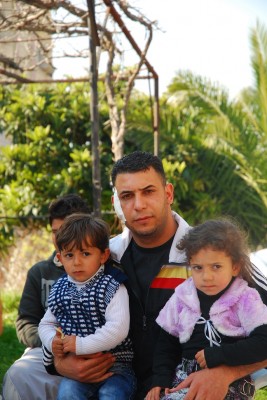 Samer and his two children

A family of four was kidnapped by settlers on Thursday afternoon while having a picnic close by an outpost near Qadumim. When soldiers arrived at the scene they chased away the relatives of the kidnapped family with tear gas and rubber coated steel bullets alongside settlers throwing stones.

It was around 4.30 pm on Thursday that the El Seddi family, who were eating almonds on their families land in the outskirts of Jit, east of Nablus, was kidnapped by a gang of settlers. The settlers approached the family on four wheelers in a group of about ten young men with their shirts wrapped around their heads to conceal their faces.

The family was dragged down the valley by the settlers who were armed with big sticks, and forcing the mother to say to their children that “this land does not belong to us.”

The youngest of the children, only 2 years old, took no notice of this and blatantly told the settlers what he thought of them in response. The father, Samer received many blows during the descent into the valley, and the day after his face was swollen and patched up.

The little three-year old girl also sustained wounds on her legs, and the mother says that she was constantly being pushed around and taunted by the settlers while carrying her children.

After about half an hour Samer’s father Ibrahim and two of his brothers became worried for the family and went to look for them. As they climbed a hilltop adjacent to the settlement they saw how the family was being dragged up the hill towards the settlement.

” They have an old dried out water well by the outpost, we think their plan was to throw the family in there,” said Ibrahim Jamil Khader, who hides a black eye behind a pair of big shades.

When the settlers realized they had been discovered they momentarily released the family who started running towards their relatives on the adjacent hill. Right behind them 25-30 settlers followed. When the family reached the top of the hill adjacent to the settlement, Israeli soldiers had arrived at the scene.

It soon became obvious however that they had not come to apprehend the kidnappers. Instead Samer’s father and brothers had to stall the soldiers and settlers while the family made their way back towards the village.

“As I was talking to the soldiers one of the settlers jumped out  in front of them and punched me in the face. I asked the soldiers why
isn’t he here to care about our lives and he answered that ‘We can’t fight these people, they are dogs.'”

The three men were chased off by the soldiers shooting tear gas and rubber coated steel bullets as well as the settlers who threw stones. There have been problems with the settlers before but something like this has never happened.

“No one was prepared for this, says Ibrahim. The children are mentally exhausted, and we are afraid that they will be traumatized by this.”

The military has a different view on what happened that day.

“The official story is that the family was lost in the hills and that the settlers helped them find their way back. They are so full of lies,” says Ibrahim.