New
Home / Photo Story / Left behind at the scene of the crime: Israel wages war on Bil’in

Left behind at the scene of the crime: Israel wages war on Bil’in

Weeks ago, Wedad Yassin traveled back to Ein Yabrud, a village near Ramallah in the West Bank, to visit her family and to experience Palestine’s rich cultural heritage. Her intention had been to tour through the Al-Khalil district, Ramallah, Bil’in, and Jerusalem. However, she was denied entry to Jerusalem. Nevertheless, Yassin explored Bil’in, site of the weekly demonstrations against Israel’s apartheid wall, and came across this jam’iyya or association dedicated to “enhancing and reviving Palestinian culture along with documenting Israeli crimes”.

Included is a series of photographs from Yassin’s visit to this center. Each of the shells, bullet casings, and projectiles featured in these images were collected over time by the members of this jam’iyya after they were used against unarmed protesters during the demonstrations in Bil’in. Israeli forces continue to use live ammunition, rubber bullets, and USA-made tear gas canisters against the Bil’in activists on a regular basis and have designated the area a military zone to allow soldiers to treat the civilians as hostile combatants. 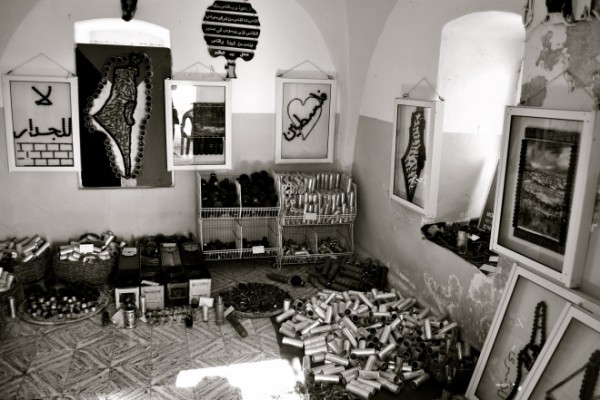 Wedad Yassin is a 21-year-old Palestinian-American who studies Middle Eastern Studies at Benedictine University. Less than a year ago, she participated in a study abroad program at Birzeit University where she taught English at the Jalazone Refugee Camp. She returned to Palestine for a family visit just weeks ago although she was denied entry to Jerusalem. Wedad is an aspiring professor and an ambitious photographer.