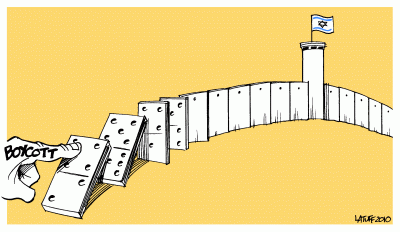 Commemorating Land Day, the Palestinian BDS National Committee (BNC) invites people of conscience around the world to unite for a BDS Global Day of Action on 30 March 2012 in solidarity with the Palestinian people’s struggle for freedom, justice and equality and for Boycott, Divestment and Sanctions (BDS) against Israel until it fully complies with its obligations under international law.

Let’s showcase our BDS successes through creative actions and media efforts and mobilize for the World Social Forum Free Palestine in November 2012.

First launched at the World Social Forum in 2009, the BDS Global Day of Action on 30 March coincides with Palestinian Land Day, initiated in 1976, when Israeli security forces shot and killed six Palestinian citizens of Israel and injured many in an attempt to crush popular protest against ongoing theft of Palestinian-owned land. Thirty-six years on, Israel continues to entrench its regime of occupation, colonization and apartheid and intensify its grave violations of the basic rights of Palestinians everywhere, whether those living under occupation, citizens of Israel, or the majority of the Palestinians, the refugees.

In the past year we have continued to witness a historic outburst of people power motivated by the desire for justice and freedom from tyranny and corporate greed. There is renewed belief in popular struggles as a means to achieve human emancipation and empowerment. Ordinary people have bravely stood up to the decades-old regimes of the Arab region, overcoming their fears and challenging their longstanding subjugation. Largely inspired by the Arab popular upheavals and earlier, similar uprisings across Latin America, people across the world have vocally “occupied” the centers of corporate exploitation or otherwise mobilized to demand social justice and an end to devastating wars. The ‘Arab Spring’ has given new impetus to the ongoing struggle against imperial hegemony in the global south and a new reach for the alternatives to neoliberalism. The global 99% are further uniting and connecting their struggles for justice, rights and dignity.

In this spirit of shared struggle, we invite Palestine solidarity activists and all those active in social justice and human rights causes worldwide to use this day of action to launch a far reaching mobilization effort towards the upcoming World Social Forum Free Palestine to be held in Porto Alegre, Brazil, in November 2012 and to take action to highlight and develop the key campaigns of our global movement.

The Forum will provide a unique space for discussion of a unified global strategy to uphold the inalienable rights of the Palestinian people, including the right to self-determination and end Israeli violations of international law.

The BDS Global Day of Action is an opportunity to showcase the achievements of our diverse and global movement through visible and creative actions. The BNC calls on supporters of Palestinian rights to focus on developing thoroughly researched, broad based and strategic BDS campaigns that are based on the three operational principles of the movement: context-sensitivity, gradualness and sustainability.  Developing such a long-term vision is essential for the growth and sustainable success of the movement.

With these criteria in mind, the BNC suggests the following forms of action for this BDS Global Day of Action:

1. Organize a visible and creative protest, flash mob or action that promotes an existing long-term campaign to a new audience;

2. Prepare outreach meetings or events or media initiatives that seek to bring BDS to new audiences;

3. Launch mobilization initiatives for the WSF Free Palestine, to be held in late November in Port Alegre, Brazil. Consider announcing the formation of national, regional or sector mobilizing committees and to start public and media outreach. The mobilizing committees for the WSF Free Palestine serve to mobilize and to discuss how to use this opportunity to strengthen local solidarity efforts and provide them with global reach and exposure. More information here.

4. Where possible, use the Global BDS Day of Action as a launching pad for new BDS campaign initiatives;

5. Call on governments to implement incremental sanctions against Israel, by heeding the call from Palestinian civil society for a military embargo on Israel or by suspending free trade agreements or other agreements;

6. Publicize, promote and make use of the recently published report issued by EU heads of mission to occupied Jerusalem calling for preventing and discouraging “financial transactions in support of [Israeli] settlement activity.” This can be accurately interpreted as a call for a ban on colonial settlement products from entering the EU market and for effective measures against all actors implicated in Israel’s colonization of East Jerusalem and the rest of the OPT.

For information on how to join this global event and how to develop ongoing BDS action in your country, organization and network, please contact the Palestinian BDS National Committee (BNC) at: bdsdayofaction@bdsmovement.net.

We’ll be highlighting all of the day’s actions on the bdsmovement.net website, so please send any information about planned actions ahead of time to bdsdayofaction@bdsmovement.net.

On the day itself, let’s all use Twitter hashtag #bds to promote our actions and don’t forget to follow @bdsmovement to follow the action as it unfolds!