Villagers of Bruqin and supporters went out today to plant trees in the field by the factory. While trees were planted alongside pictures of Khader Adnan, two young men sneaked over to the fence of the factory and put up Palestinian flags.

In the outskirts of Bruqin, a small village in the Salfit area, there is a field where old Roman ruins slumber amongst the olive trees. The field would be a peaceful place if it was not for the huge Israeli factories built on stolen land right next door. The Israeli factories have caused pollution in the area, contaminating crops and pastures. The rapid settler expansion in the Salfit area is stirring up distress among the residents in Bruqin who worry that even more of their land will be stolen. 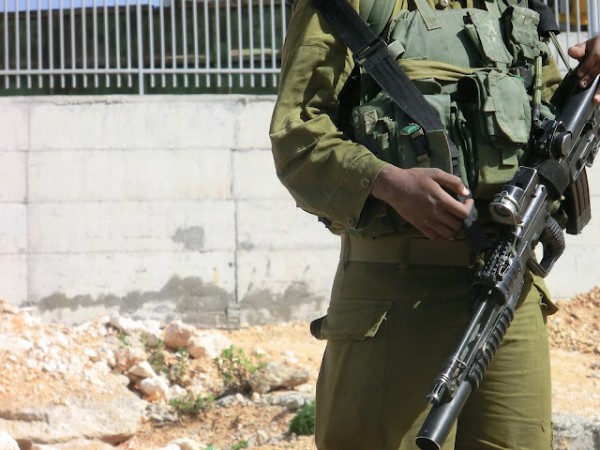 Being attacked for harvesting resistance - Click here for more photos

In the Salfit area, 19 Palestinian villages are surrounded by 22 illegal settlements. It is a cluster of stolen land that is threatening to cut the West Bank in two if expansion is allowed to continue. Israel plans to build train tracks from Tel Aviv to the illegal settlement of Ariel, which would speed up this divide.

As the land repairing villagers came closer to the factory, they drew on the attention of the illegal settler security, and a man with a rifle demanding for volunteers to leave. Since the tree planting was taking place on Palestinian soil these calls where not heard by the villagers. A few minutes later the first Israeli soldiers started showing up asking the tree planters to move back from the factory. As some men decided to plant yet another tree at the edge of the factory area, they were surrounded by soldiers and one man was pulled away from the group.

ISM activists tried to get a straight answer as to the reason of the man’s arrest, but it was of no avail. Instead the soldiers surrounded yet another group of men and started tugging at them.

When questioned why they were attempting to arrest Palestinians, the only answer offered by the soldiers was that the area had been declared a closed military zone and that the man had been bothering the soldiers. However the soldiers could not produce any document proving the declaration of the area beeing a military zone.

ISM activists demanded to see relevant paperwork in support of the military’s claims, else they must release the man since there were  no substantial suspicions against him. After apoximately 20 minutes of avoiding the stares of upset activists and villagers, the soldiers retreated, and after some further negotiations back and forth the Palestinian man was  successfully de-arrested and released.

Though this particular case ended with nothing worse than a pair of sore wrists, it is a clear example of the lawlessness suffered by Palestinians under Israeli military law.