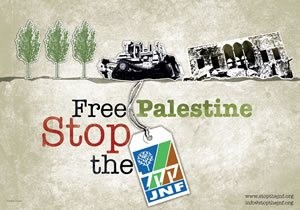 The Jewish National Fund has designated Sunday 5th February as ‘Green Sunday’, when it encourages people to donate money to ‘plant trees in Israel’.  The JNF claims to have environmental objectives.  Don’t be taken in.  The JNF’s tree planting is a cover for ethnic cleansing.

The JNF exists to acquire land in Israel/Palestine for the sole use of Jewish people.  For more than 100 years, the JNF has been complicit in expulsions of Palestinians from their homes, the destruction of their villages and prevention of the return of refugees – by planting trees over the remnants of the destroyed homes.

Environmental groups throughout the world are adding their support to the international call from Palestinian civil society to Stop the JNF.

Don’t support the JNF’s ‘Green Sunday’. Instead, use the opportunity to: